Do you know your major champions?

Quiz Answer Key and Fun Facts
1. This is as far back as I can remember: who triumphed at the US Open of 1972?

This was Seve first British Open title.
3. Who won the 1982 US Masters?

4. In which year did Nick Faldo win his first major title?

This win was at Muirfield for the British Open, and by the end of the 1990s he had won another 5 majors.
5. Jack Nicklaus won his 18th major at the US Open.?

There was a 3-way play-off between Mark Calceveccia, Wayne Grady and Greg Norman.
7. 1989 British Open: who triumphed in the play-off?

He was champion in 1996.
15. How many shots was Nick Faldo trailing Greg Norman going into the final round of the 1996 US Masters?

He won the British Open and the USPGA.
18. How many players were in the play-off in the 1994 US Open?

The play-off was between Ernie Els, Colin Montgomerie and Loren Roberts. Ernie Els won the 18 hole play-off.
19. At which golf course did Vijay Singh win his first major championship?

The US Masters was the only major champioship he did not win in 2000.
21. In which major championship did David Duval win his first major?

He'd been ruuner-up many times but had never triumphed: in the 2001 USPGA he was runner-up to David Toms.
23. Who did Retief Goosen beat in the play-off at the 2001 US Open?

This was Retief's first major triumph.
24. How many majors had Nicklaus achieved when he retired? 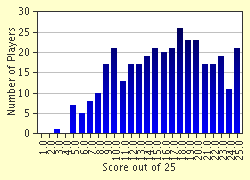 
Other Destinations
Explore Other Quizzes by thesuave