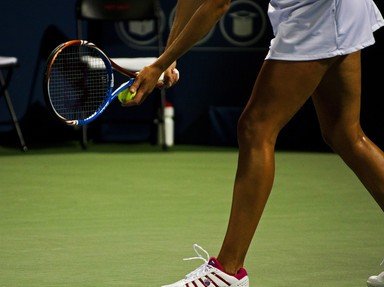 The 2022 Australian Open tennis tournament took place between 17-30 January 2022 in Melbourne. This quiz covers some of the events and winners of the event.

Neither Federer nor Wawrinka played in 2022 as both were injured. Murray did take part in 2022, having received a wild card, but was knocked out in the second round. Djokovic was the title holder, having won his ninth Australian title in 2021. Having been given permission to take part, Djokovic had arrived in Australia but ran into immediate difficulties over his visa since he was not vaccinated against Covid-19.

After some legal arguments, the government revoked his visa and Djokovic was deported.
2. Defending women's champion Naomi Osaka did take part in 2022, but failed to win again. In which round was she eliminated?

Naomi had taken a break from the game after some well publicised mental health issues, so her seeding was a relatively low thirteen in the draw. After straightforward wins in the first two rounds, Naomi was knocked out of the tournament in round three by Amanda Anisimova, representing the USA.

The match was close, with the third set tie break ending Osaka's hopes. Anisimova herself lost in the next round to the eventual champion.
3. The losing semi-finalists in the men's singles were Stefanos Tsitsipas and which Italian player?

Berrettinni has started to make his mark on the men's game having reached the semi-final of the US Open in 2019, the quarter-final of the French Open in 2021 and the final of Wimbledon, also in 2021, when he lost in four sets to Novak Djokovic. Matteo was seeded seven in the event, so surpassed his ranking, losing in four sets to the eventual champion.

The other players listed as options are also Italian with Sinner producing the next best performance, losing in the quarter-finals.
4. The 2022 men's doubles final was an all Australian affair. Three of the participants were Matthew Ebden, Max Purcell and Thanasi Kokkinakis. Who was the fourth?

The event gave us a few milestones. It became the first all Australian men's doubles final since 1980, when Edmondson and Warwick beat McNamara and McNamee, and the first Australian duo to win since Mark Woodforde and Todd Woodbrige in 1997. Kokkinakis and Kyrgios had to be given a wild card to enter the event and their victory was the first win for wild card entries since the open era began.

Soon dubbed the 'Special Ks', Thanasi and Nick had previously won the Wimbledon boys' title in 2013, so their eventual victory shouldn't have been a complete shock. They beat their fellow Aussies, Ebden and Purcell, 7-5, 6-4 in the final.
5. Australia fared less well in the Mixed Doubles, with the Australian duo losing in the final. Jaimee Fourlis was the female; who was her male partner?

Jaimee and Jason lost the final 6-3 6-4 to Kristina Mladenovic of France and Ivan Dodig of Croatia. It was the first time the pair had won together but both have several doubles titles to their credit, both in same gender doubles championships and mixed doubles.

Of the other options, only Ebden is Australian - he and partner Sam Stosur lost narrowly to Fourlis and Kurber in round two. Salisbury is British and Krajicek is American.
6. Barbora Krejcíkova and Katerina Siniakova were the winners of the women's doubles titles. From which country do they both come?

Barbora and Katerina were top seeds for the event and lived up to expectations by lifting the trophy. They defeated Anna Danilina, from Kazakhstan, and Brazilian Beatriz Haddad Maia in the final, 6-7 6-4 6-4. It was a first final for their opponents, but Krejcikova and Siniakova had already paired up to win the French Open in both 2018 and 2021 and Wimbledon in 2018.

Barbora also progressed well in the singles, reaching the quarter-finals before losing to Madison Keys.
7. In a strange quirk, both the men's and women's defeated finalists had variations of which first name?

The losing finalists were Daniil Medvedev in the men's and Danielle Collins in the women's. For Daniil it was the second successive year he had lost in the final, as he was the man defeated by Djokovic in 2021. He put up a good performance, though, winning the first two sets before being pegged back to lose 6-2, 7-6, 4-6, 4-6, 5-7. In 2021 he lost in straight sets.

For Danielle, an American, it was her first final, having beaten Iga Swiatek, the Polish winner of the French Open in 2020, in the semi-final. Although she lost in straight sets, the match was closely contested, finishing 6-3 7-6.
8. The 2022 ladies singles Australian Open title was claimed by which player?

Australian Ashleigh Barty became the first home women's champion since Christine O'Neil, who won back in 1978. She achieved the win without dropping a set along the way, including the final, and lost her own service games only three times during the tournament. The win added to her previous successes in winning the French Open in 2019 and Wimbledon in 2021, proving her skill on three different surfaces.

The other women listed did well in the tournament - Keys lost to Barty in the semi-final and Pegula lost to her in the quarters, Kanepi lost to Iga Swiatek, also in the quarter finals.
9. Which former Australian Open champion presented the trophy to the 2022 women's singles winner?

In a well kept secret, Evonne Cawley (formerly Goolagong) was announced by MC Todd Woodbridge as the person to present the trophy. Evonne and Ashleigh share a common Aborigine heritage but Evonne had told Ash that she wouldn't be able to attend. Whether she would have presented the trophy had Ash lost isn't clear.

Evonne, of course, had an impressive career of her own, winning Wimbledon twice, the French Open once and the Australian Open four times. All her wins, apart from Wimbledon in 1980, came in the 1970s. Evonne also reached the US Open final four times, finishing as runner-up each time.
10. Which player became the Men's Australian Open champion in 2022?

Although he may well have won anyway, Nadal took full advantage of the absence of his usual rivals by winning his second Australian Open title - the first came in 2009. The victory gave him his 21st major singles title, which includes thirteen at the French Open and four US Open wins. This puts him ahead of Federer and Djokovic, who remain on twenty wins each at the end of the 2022 Australian Open. The win didn't come easily, as Denis Shapovalov took him to five sets in the quarter-finals, the semi-final was a four set match and the final was another five setter. Nadal was seeded only sixth for the event.

Zverev lost in round four and Auger-Aliassime and Monfils both lost in the quarter-finals.
Source: Author rossian