This is a quiz about the players of Wrexham FC along with a bit of history in it as well.

Quiz Answer Key and Fun Facts
1. What team was Anthony Williams at before he signed permanently for Wrexham?

Anthony Williams joined Carlisle in 2006-07 season.
2. Which player came from T.N.S and signed for Wrexham?

Steve Evans started at Crewe Alexandra and West Bromwich Albion. However, he was unable to make the first team for either club, so he moved to T.N.S.
3. What nationality is Silvo Spann?

The club was formed in 1864, when a meeting was held at the Turf Hotel with members from the local cricket club who raised the issue of starting a football club for the ensuing season. Even though the badge says 1873.
7. Which team did Wrexham beat 10-1 in 1962?

In 1962, the club did record the highest ever league score, beating Hartlepool United 10-1, a game that included three different hat-trick scorers.
8. Wrexham's ground in 2007 was called _______ Ground.

Until the club was formed, the ground was used mainly for cricket and sometimes horse racing.
9. Which player played for Liverpool and Chester city?

Danny Williams started off playing for Liverpool, where he won Wales Under 21 caps. He then moved to Wrexham.
10. What nationality is Micheal Proctor? 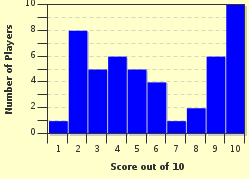 
Other Destinations
Explore Other Quizzes by superstar2007