The lives of six people and the fun they have.

Quiz Answer Key and Fun Facts
1. Who walked Carol down the aisle when she married Susan?

Ross the ex-husband gave Carol away.
2. What is the name of Ross's son?

Ben was named after a janitor at the hospital.
3. What was the name of Rachel's fiance that she left at the altar?

Rachel left Barry at the altar.
4. Which character got hit by a tranquilizer dart?

Phoebe was trying to save Marcel.
5. Which character is the actor?

The big chance came for Joey when he got a role on 'Days of Our Lives.'
6. What is Monica's occupation?

Monica is always cooking something.
7. Who played Richard?

Richard was much older than Monica.
8. Who has the annoying voice?

How can anyone stand her for very long?
9. When they were playing football before they ate Thanksgiving dinner, who was on the shirt that Phoebe was wearing?

A picture of 'That Girl' was on her shirt.
10. Which holiday does Chandler not like?

He found out that his parents were getting a divorce on Thanksgiving.
Source: Author lainiepoo 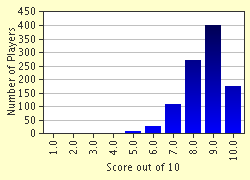 
Other Destinations
Explore Other Quizzes by lainiepoo