Welcome! If you've landed here, you're a "Friends" guru and want to flex your Friendrocepts. Have fun!

Quiz Answer Key and Fun Facts
1. What is the name of the potential boss that Rachel kissed accidentally in the fifth season?

Rachel accidentally kisses him after her first interview, and when he invited her back, she assumes its because of the kiss. Misunderstandings follow and she gets the job despite forgetting Mr. Zelner's name.
2. Chandler thinks that maybe there is a town somewhere called Sample, and when you enter it says "You're in Sample." What state did he think that the town of Sample would be in?

"Do you think there's a town in Missouri, or some place, called Sample?"
3. When Phoebe agrees to have Frank Jr's babies, how many embryos does Frank suggest the doctors implant in Phoebe?

Alice replies, "She's a woman, not a gumball machine."
4. What is the name of Ross and Monica's cousin who didn't invite Monica to her wedding?

Frannie didn't invite Monica because Monica used to date her husband, Stewart.
5. When Elizabeth (Ross' student girlfriend) goes to Florida for Spring Break, what is the SPF on her sunscreen?

Ross is worried about Elizabeth's revealing bathing suit, and claims that its because of skin cancer. She replies that he shouldn't worry because its SPF 30.
6. What size shoe does Joey wear?

It is revealed at the reception for Monica and Chandler's wedding that Joey has freakishly small feet. He claims to be a size 11 and a half, but is really a size 7.
7. What is the name of the poem that Julio (Monica's boyfriend from the diner) wrote when he was thinking of her?

Translucent Beauty...
8. Who taught Rachel how to kiss?

Mindy, Rachel's maid of honor from her wedding with Barry, taught Rachel how to kiss. This pleases Joey.
9. Which of these celebrities has never appeared on "Friends"?

Robin Williams appears along with Billy Crystal in the coffee house, Julia Roberts appears as Suzie Moss, an old acquaintance of Chandler's, and Helen Hunt comes into Central Perk, mistaking Phoebe for Ursula.
10. Discounting the first episode (The Pilot,) what is the number of the FIRST "Friends" episode that has a name not beginning with "The One With" or "The One Where?" Note: 'Friends' episodes are numbered season number first, and then 2 digit episode number. 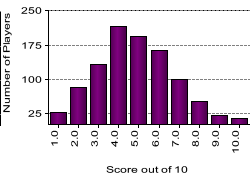