This quiz is very general and I hope has a little something about all the characters.

Quiz Answer Key and Fun Facts
1. When Monica was trying to figure out the recipe to Phoebe's grandmother's cookies, which batch made Ross sick?

Then Monica finds out Phoebe's grandmother got the recipe from a French relative named 'Nestle Tollhouse'.
2. When Rachel is out with Michael, she discusses Ross buying a cat with Julie. She feels they should get another type of pet. What does she suggest?

She then calls and leaves a drunken message for Ross telling him that she is over him.
3. When Chandler and Monica get back from London, Monica tells Chandler that sleeping with him meant a lot to her because she was going through a rough time. Chandler reciprocates and tells her it also meant a lot to him. Why?

Then they decide they are still on London time so they can still sleep together.
4. What part of Ross' anatomy does Rachel say he was very talented with?

At the end, Ross says that the only person who will be enjoying his hands is him.
5. When Ross is overheating because he is wearing leather pants, what does his date do that makes him even more uncomfortable?


Answer: She snuggles with him

This is in the epilogue for the episode where Phoebe has a cold that makes her sound sexy.
7. When Chandler is fighting with his mom, what does Joey mistakenly believe he hears from her?


Answer: When are you going to grow up and realize that I have a bomb?

Then Ross suggests that he may not have heard it correctly.
8. When Joey, Ross, and Chandler ambush the stripper in Chandler's office, Joey suggests that Ross be Mr. {Gonzales;} what name does Joey choose for his own alias?

Then Ross comments that Joey's idea is 'diverse'.
9. What does Emily think the 'time-out' signal that Ross gives her means?

This is when Emily is freaking out about all the things that are going wrong with their wedding plans.
10. When the girls are spying on George Stephanopoulos, Rachel drops something off the roof. What was it?

Then it is returned to them at the end.
Source: Author danaZ 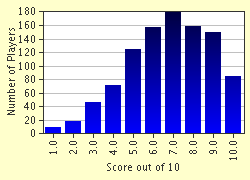 
Other Destinations
Explore Other Quizzes by danaZ