Do you believe you know everything about season 8? Prove it then...

Quiz Answer Key and Fun Facts
1. Who does Cristina stab with an epi?

Alex is massaging the heart during surgery. Cristina tries to push a unit of epi and suddenly pushes it to Alex's hand which causes Alex's heart to stop. Alex later says that Cristina was trying to kill him.
2. Who does Jackson kick out of his OR because he can't concentrate?

An old patient of Bailey's shows up and wants Sloan and Jackson to remove the lymphoma on her hand but Bailey comes in the OR. She talks so much and causes Jackson to kick her out.
3. In which episode do Meredith and Derek take Zola back?

Meredith and Derek are waiting for their pizza to arrive and then the bell rings. Zola and Janet are at the door. So they get her back again.
4. What's the name of the last man in the world that Arizona kisses?

Nick is Arizona's brother's best friend and he shows up in the hospital because he has cancer. Callie can't save him because he waited 6 years after getting diagnosed to seek treatment.
5. What sentence does episode 9 ("Dark Was the Night") begin with?


Answer: "I had a terrible day"

This episode is actually the episode that Henry, Teddy's husband dies in and it starts with: "I had a terrible day. A fight with the boss, a car crash. We describe this as terrible when nothing terrible has actually happened."
6. In episode 13 ("If/Then") which doctor has a crush on April?


Answer: Both Alex and Charles

In episode "If/Then", Meredith dreams an alternate reality. In that world Charles has a crush on April, and Alex is engaged to Meredith but eventually cheats on her with April.
7. What's the name of intern Morgan's son?

Alex has a pregnant intern named Morgan. He runs her around the hospital causing a heart attack for her and they have to deliver her son Tommy prematurely.
8. Who does Lexie hit with a softball?

Mark has a girlfriend name Julia who works at Seattle Pres. When they are playing softball, Lexie gets angry at her and throws a softball ball, hitting her in the breast area.
9. "How well we play, that's up to us." Who says this sentence at the end of episode 24?

Richard says this at the beginning of the episode (this sentence is actually the same sentence that Richard used to welcome the interns in the pilot episode) and Meredith repeats it at the end.
10. What is the name of the home that Richard sends Adele to?

Rose Ridge is the same place that Meredith's mother was kept in when she was alive.
Source: Author nikies 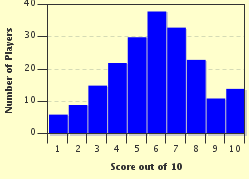 
Other Destinations
Explore Other Quizzes by nikies