I'll name an event, and you have to choose who did it! Everything is from the first and second seasons of "Grey's".

Quiz Answer Key and Fun Facts
1. Which intern had to perform surgery in an elevator?

In the second season episode "Bring the Pain", George and Alex had been transporting a patient to the Operating Room via elevator when the power went out. The doors were pried part way open, but the elevator was stuck between two floors. Dr. Burke had to lie on the floor and pass tools through the opening.

He originally tried to give the scalpel to Alex, but Alex froze up and George took over. George performed the surgery with Dr. Burke giving instructions from outside the elevator.
2. Who knitted a complete sweater?

Izzie and Meredith took up knitting in the second season when they swore off men. Meredith wasn't as good at it as Izzie was, and Izzie completed a whole sweater in one day. In the episode "The Name of the Game", Izzie gave the sweater to Denny Duquette, the heart transplant patient she became close with.
3. This person went to Idaho with Dr. Bailey.

They went to Idaho in the second season episode "Begin the Begin" to harvest a new heart for Denny Duquette. Unfortunately, they were not able to, and Denny did not get a new heart in this episode.
4. Who believed his or her life was saved by a pigeon?

At the beginning of the episode "Let it Be", from season two, a pigeon pooped on George's bagel, causing him to step aside. Moments later a man fell from the sky and crushed the pigeon which had landed where George had been standing. George was very cheerful and went around exclaiming "Carpe Diem!" for the rest of the day because he believed he side-stepped death that morning.
5. She gave birth to a boy.

Dr. Bailey gave birth to her son William George Bailey-Jones in the second season. She went into labour in "It's the End of the World" and delivered the baby with George and Addison's assistance in "As We Know It". Cristina became pregnant in the first season but lost the baby, Izzie gave birth to a girl when she was a teenager, and Addison did not have any children.
6. Who was able to get Izzie away from Denny's dead body?

Denny died at the end of the second season in "Losing My Religion". Izzie had accepted his marriage proposal and was going to visit with him, only to find him dead in his hospital bed. When the others arrived to his room, they found that Izzie had gotten in the bed with him and was holding him. Alex was the one who told her that Denny wasn't really Denny anymore, that he had died and gone.

He then picked her up and held her while she sobbed.
7. Who got poison oak?

Addison got poison oak in a very sensitive part of her body in the second season episode "What Have I Done to Deserve This?", from walking the dog in the woods. She believed it was karma for having cheated on Derek, and the fact that it happened right after Mark was in town was no coincidence.
8. Which of these cheated on a significant other?

Addison cheated on Derek before he came to Seattle (so before the show actually started). Meredith's mother, Ellis Grey, had cheated on her husband when Meredith was young, a fact that was revealed throughout the second season, and Alex cheated on Izzie with the nurse Olivia in the episode "Much Too Much".
9. Which intern had to babysit Dr. Bailey's baby?

Dr. Bailey had to bring the baby to work with her in "Band Aid Covers the Bullet Hole" because her husband was unavailable to watch the baby at home. She had to scrub in for surgery and Cristina was around at the time, so she got stuck on babysitting duty.
10. Who first called Derek "McDreamy"?

Cristina was the first one to refer to Dr. Shepherd as "McDreamy", when she and Meredith were discussing him in "The First Cut is the Deepest".
11. Who coined the name "McSteamy"?

When Mark showed up at Seattle Grace in the episode "Yesterday", the interns were spying on him and Derek arguing in Dr. Webber's office, and the girls were drooling over Mark. Cristina suggested "McSexy", Izzie offered "McYummy", but when Meredith said "McSteamy", they agreed that that was the name for him.
12. This doctor executed the "special super secret silent sunset surgery".

In the first season finale "Who's Zoomin' Who?", Dr. Webber went to Derek about problems he had been experiencing. When it turned out to be a brain tumour, Webber decided to let Derek operate, but only if the procedure was kept secret. Dr. Bailey and Meredith assisted on the operation. Derek was the one who called it the "special super secret silent sunset surgery".
13. Who said "Pick me. Choose me. Love me."?

After discovering that Derek was married, Meredith had decided to step aside. But she soon realized that she still loved him and wanted to be with him. In the second season episode "Bring the Pain", she made this plea to Derek, asking him to choose her over Addison. In the next episode, he revealed that he was opting to stay with his wife.
14. This intern failed one of the medical board exams.

Chief Webber informed Alex he had failed his exams in the second season episode "Deny, Deny, Deny". The other interns got together to help him study in "Thanks for the Memories" and he passed his make up test.
15. Which doctor went on strike with the nurses?

At the beginning of "Break on Through", the interns found themselves staring at a mob of rallying nurses in front of the hospital entrance. Cristina was the first to push through and had food thrown at her. George was the last one remaining on the other side of the picket line and opted not to cross it, because he was "a union man!" He felt that his blue-collar father and brothers would not forgive him for not supporting a strike.
Source: Author guitargoddess 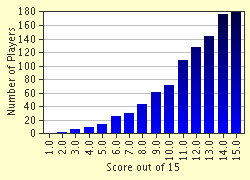