Quiz Answer Key and Fun Facts
1. What tragic event happens to Cristina on her wedding day in season three?


Answer: She gets her eyebrows waxed off.

She gets her eyebrows waxed off and reports to the hospital wanting to cut something open before she gets married.
2. In season 5, Derek is having a hard time dealing with killing a pregnant woman and won't get off of the sofa. Whose cereal is he eating?

He's eating Alex's cereal and shoves it back to him when he gets up to shower.
3. After what event does Erica Hahn decide to leave Seattle Grace?


Answer: She finds out Izzie stole her patient's heart for Denny.

Erica finds out from Callie that Izzie stole her patient's donor heart for Denny Duquette and goes to the Chief about it. She wants the Chief to fire Izzie over it and he plays it off like he doesn't want to bring the case up again.
4. In season 5, Seattle Grace gets a patient who is on death row. Why does Meredith tell Derek she went to his execution?


Answer: to show him compassion

The prisoner tells Meredith that he was beaten as a child and would hide in the cabinet and learned to read by reading the detergent box over and over. She tells Derek she just wanted to show him compassion.
5. In season 3, how does Meredith drown?


Answer: A victim from the ferry crash accidentally kicks her and she falls into the water.

The little girl is helping her by handing her tools to fix the victim's leg. He panics and accidentally kicks Meredith over the ledge and into the water.
6. In season 5, Cristina finds a magical place in the hospital where people have time to pour fruity drinks and get massaged while at work. Where is this?

Cristina is sent to Dermatology to pick up cream for a patient, and ends up hanging out there with Meredith and Izzie. The first year resident (Dr. Daisy Pepman) pours fruity drinks and gets her hands massaged for doing "delicate work". George finds them and makes them get back to work.
7. The attendings all choose Cristina for the first solo surgery, but since she was disqualified, she has to pick a fellow resident to perform their first solo surgery. Who does she choose?

To everyone's surprise, she picks Karev. Since the interns are banned from the OR, he chooses Izzie to scrub in with him and he tells her he loves her.
8. In season 2, Cristina and Burke are dancing in their apartment. While they're dancing, Burke answers Cristina's cell phone. What does he find out?

Cristina's landlord calls to tell her there's a flood in her old apartment. This causes trouble because Burke thinks she completely gave up her old apartment to live with him.
9. Bailey's son is rushed into the hospital with internal injuries. What happened to him?


Answer: A bookshelf fell over on him.

This starts a fight between Miranda and Tucker (her husband). Someone left the baby gate open and the baby wandered into the office when the bookshelf fell over.
10. At the end of season 5, we lose a surgeon in a bus accident. Who is it?

George pushes a woman out of the way of an oncoming bus, but he gets run over and isn't able to be recognized until he uses his finger to write "007" on Meredith's hand. His injuries were fatal.
Source: Author rtdnlbntt 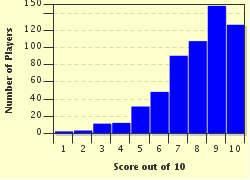 
Other Destinations
Explore Other Quizzes by rtdnlbntt