You do not know "Scrubs" unless you can pass this test!

Quiz Answer Key and Fun Facts
1. J.D. makes a shirt to welcome Dr. Cox back after he kills three patients. What does it say?

Later in that episode, Dr. Cox admits that he actually liked the shirt.
2. Mike Schwartz plays who in the show?

This was before Elliot and Turk became good friends.
4. J.D. falls into a giant puddle after a rainstorm and meets a manatee. What is the name of the manatee?

The Janitor is the one that named it.
5. The Janitor wears a jumpsuit.

The Janitor says that he wears a shirt, pants and a belt. Besides who wears a belt with a jumpsuit?
6. What does Dr. Kelso nickname Debbie?

Dr. Quinlan is Todd.
Dr. Mickhead is the one that supposedly killed his wife.
Boon is an intern that Dr. Kelso told stories of his career to.
9. According to Todd, who was the "best conversation ever" between?

Jordan: "Actually that's one of the reasons I divorced Perry."
Elliot: "What you don't like Cox."
Jordan: "No, I love Cox."
Todd: "Best conversation ever."
Jordan: "That's the problem."
10. If you are staying the night at Turk and JD's, what do you need to bring?

Danni and Carla are both aware of this rule.
Source: Author magicaladnil 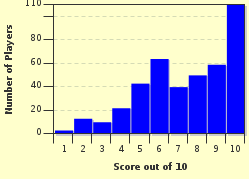 
Other Destinations
Explore Other Quizzes by magicaladnil