The One With All The Clothes Trivia Quiz

This is the first part of my quiz all about the clothes worn by the six 'Friends' throughout seasons one to nine. Enjoy!

Quiz Answer Key and Fun Facts
1. What number appears on Joey's red jersey in 'The One With The Football'?

Chandler ripped Joey's red jersey while trying to hold him back in a game of football.
2. What colour bridesmaid dress did Monica have to wear at Ross's wedding to Emily?

A scene deleted from 'The One With Ross's Wedding' showed Emily and Monica buying the bridesmaid dresses.
3. Who did Rachel dress up as for Ross's fantasy in the first episode of season three?

Rachel dressed up as Princess Leia for Ross although it was spoiled by Chandler revealing a certain secret before.
4. In 'The One With The Holiday Armadillo', who does Joey dress up as?

Chandler dressed up as Santa and Ross was dressed as an armadillo.
5. At Monica's Halloween party in season eight, what does Chandler dress as?

Joey came dressed as Chandler, Ross came as 'Spudnik', Monica came dressed as Catwoman, Phoebe came as Supergirl and Rachel came wearing a new dress because she wouldn't be able to fit in it again for a long time.
6. What was the colour, according to Ross, of the shirt that he tried to get back from Mona's apartment?

Ross insisted that the shirt was salmon but everyone else thought it was pink.
7. In the pilot episode, what is Rachel wearing when she enters Central Perk?

Rachel walks into Central Perk while the gang are conforting Ross about Carol.
8. What was Joey dressed as when the 'Friends' arrived in Vegas?

Joey didn't want them to come and see him in vegas because the film he was supposed to be starring in had been shut down.
9. What item of clothing did Ross have a problem with while on a date with Elizabeth Hornswoggle in series five?

In "The One With All the Resolutions", Ross vowed to do one new thing every day. One day his 'new thing' was asking out a stranger in the coffee shop - she turned out to be named Elizabeth Hornswoggle. On the day of the date, his 'new thing' was to wear leather pants. Unforunately, they were not a good choice - he got too hot in them, and then couldn't get them back on after pulling them down to 'air out'.
10. What was the colour of the dress which Rachel had to wear to Barry and Mindy's wedding?

Rachel was so embarrassed at wearing the outfit that it took a lot of encouragement to get her to come out of her room.
Source: Author Linaw50 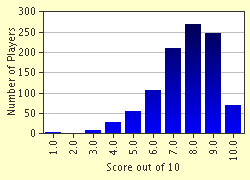 
Other Destinations
Explore Other Quizzes by Linaw50