Food plays a big role in "Friends" especially seeing as one of the characters is a chef, and another is Joey! This quiz is about some of the food references in the show.

Quiz Answer Key and Fun Facts
1. Which character in "Friends" came up with the "Jam Plan"?

She decided to make and sell her own jam.
2. What food did Chandler have too much of in "The One Where Chandler Can't Remember"?

He got so drunk, he kissed one of Joey's sisters, and then he couldn't remember which one.
3. In "The One Where No One's Ready" Phoebe had to use a Christmas decoration to cover up a stain on her dress. What caused the stain?

Ross wouldn't let her change, it would take too long.
4. What is Joey's favourite food?

5. If you were ordering the "Joey Special", which of the following would you ask for?

6. Which character is vegetarian?

7. In "The one where Ross Gets High", Rachel tries to make a dessert for the group. Her recipe book has two pages stuck together, and the results are not appetising, unless you're Joey. What dessert was she actually trying to make?

It was trifle on the bottom and cottage pie on the top.
8. In "The one with the Jellyfish" Phoebe and her real mum are were trying to find out what they had in common with each other. What food did they both say they liked?

They also thought puppies were cute and they were both hungry.
9. Which character once lost an engagement ring in a lasagne?

It was the engagement ring Barry gave to her.
10. What was the name of the synthetic chocolate that Monica had to write recipes for?

11. Monica made cookies and put them in a basket on her front door for her neighbours. Is this true or false?

It was candy she made for them.
12. In "The one with Phoebe's Dad" Monica made cookies for the mailman, Mr Treeger, and others, instead of giving them a tip. Is this true or false?

13. What perk did Monica take from a supplier, that cost her her job?

This is in "5 Steaks and an Eggplant".
14. Which character once sold brown bird cookies to help out a little girl with a broken leg?

It was his fault she broke her leg. He knocked her over, when he wasn't looking where he was going.
15. Which of the following did Phoebe crave when she was pregnant?

Joey offered to be a vegetarian for her, to balance it out.
16. In "The one where the Underdog Gets Away" what does Monica have to cook in 3 different ways to please her guests?

It was their first Thanksgiving dinner together.
17. In "The one with the Thanksgiving Flashbacks" Chandler said that Monica made a "righteous....". What words are missing in Chandler's quote?

18. In "The one with the Metaphorical Tunnel" which character pretended to be shopping for barley in a grocery store?

He was really just there to see Janice.
19. In "The one with Two Parties" what dessert does Monica make for Rachel?

20. What dessert do Rachel and Chandler like so much, that they even ate it off the floor after they dropped it?

In "The one with all the Cheesecakes".
Source: Author Roslyn 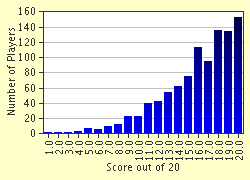 
Other Destinations
Explore Other Quizzes by Roslyn