These are ten names or terms from the television series "Friends" in fractured form for you to figure out.

Chandler Bing was, of course, one of the main six characters. He was played by Matthew Perry.
2. Less Being Weeding

This comes from the title of a second season episode, "The One With the Lesbian Wedding", which is the episode in which Ross' ex-wife Carol married her partner Susan.
3. Uh Glee Neigh Kid Eye

Played by Courtney Cox-Arquette, Monica Geller was one of the six main characters. She lived in the main purple apartment for almost the entire run of the show and married Chandler in the seventh season.
5. Tree Dove Horses

One of the recurring jokes on the series was the amount of times Ross got divorced - three. First was Carol because she was a lesbian, second was Emily, because Ross said Rachel's name at the wedding and Emily couldn't trust him anymore. And third was Rachel, after they got drunk and accidentally got married in Las Vegas.
6. Fee Bee Buffet

Another of the main six characters, Phoebe Buffay was played by Lisa Kudrow. Kudrow also played Ursula, Phoebe's twin sister, a cross-over character from "Mad About You" (Ursula was the absent-minded waitress at Riff's on "Mad About You").
7. Send Trollop Irk

Central Perk was the coffeehouse where the gang spent a good deal of their time. Rachel worked there for the first couple of seasons, and Joey did as well a little later on the series for a very brief time.
8. Gin Niece

Janice, played by Maggie Wheeler, was an on-again, off-again girlfriend of Chandler's in the first few seasons. After he got together with Monica, Janice still popped up everywhere, always exclaiming her trademark "Oh. My. GOD!"
9. Jon Knife Err Ant Stun

Jennifer Aniston played one of the main characters, Rachel Green. Aniston's ex-husband, Brad Pitt, had a memorable guest appearance on the show while they were still married, as Will - an old high school friend of Monica and Ross' who hated Rachel.
10. Mars Sell

Marcel was Ross' pet monkey, that he got in the first season to "practice" being a father. Ross sent Marcel to live in a zoo when Marcel became too sexually agressive, but it was later revealed that Marcel was working in show business. He was the 'spokesman' for Monkeyshine Beer, and also had a starring role in a film "Outbreak 2: The Virus Takes Manhattan".
Source: Author guitargoddess 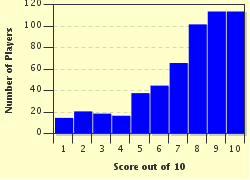