How well do you pay attention to the opening credits sequence of "Friends"?

Quiz Answer Key and Fun Facts
1. First of all, what separates each of the letters of the word FRIENDS?

The order, by character name, is Rachel, Monica, Phoebe, Joey, Chandler, and finally, Ross. Basically, they are ordered by their surnames.

There was a single episode where Courtney Cox was listed before Jennifer Aniston, and that is explained in question number 7.
4. You've probably heard the opening theme enough times by now. So can you recall what the last four words of the opening theme song are? (sing it if you have to... you know you want to!)


Answer: there for me too

The theme usually plays like this (it is sometimes cut down on syndications, but the final four words never change): "So no one told you life was gonna be this way... Your job's a joke, you're broke, your love life's D.O.A.... It's like you're always stuck in second gear... And when it hasn't been your day, your week, your month, or even your year... But, I'll be there for you (When the rain starts to pour) ...I'll be there for you (Like I've been there before) ...I'll be there for you ('Cause you're there for me too)".
5. In the hilarious hour-long season six episode "The One That Could Have Been", the opening credits are changed, as the entire episode is about what could have been if different things happened. Which of these things was NOT shown in these altered opening credits?


Answer: Joey yelling at a "Days of Our Lives" worker

This episode is a 'what if' of multiple proportions, as they ponder what life would be like if Ross was still married to Carol, Rachel had married Barry, but fawning over famous soap star Joey Tribbiani. Also, what if Monica was still fat, Chandler had chosen to become a writer, and Phoebe took a job she was offered at Merrill Lynch.
6. Who turns off the lights at the end of the credits?

From the viewer's perspective, the friends are facing away from us, with Monica on our right, switching the light off.
7. There was an episode where all six 'friends' last names' were the same. What word was added to the end of all of their names?

This is the season six premiere "The One After Vegas", which featured Chandler and Monica encountering problems with their spontaneous plan to get married. At the beginning of the episode, the opening credits featured all of the cast members (as well as the creators of the series) with the name "Arquette" added to the end of their names. This was a joke, as Courteney Cox added her new husband's surname (Arquette) to her name. For the end credits, the episode was dedicated as follows: "For Courteney and David, who did get married."

This was also the only episode where Jennifer Aniston was not listed first in the opening sequence.
8. Which friend falls into the fountain while sitting on its ledge?

Ross does indeed fall in, between the three actresses' credits, and the three actors' credits.
9. Which character spits out water upwards, imitating the fountain spray directly next to them?

He looks to his left, then his right, and then spits upwards.
10. Who sings the catchy theme song, entitled "I'll Be There For You"?

This song was actually recorded for the show specifically. After doing so, a Tennessee DJ looped it into a 3-minute song and played it on the air, which prompted their record label to ask The Rembrandts to complete the song with full lyrics in each verse.

The band's name is mentioned in the credits of every episode, and the song can be found on their album entitled "LP", released in 1995, as well as (of course) the 1994 soundtrack: "Friends: Music From The TV Series". Well, that's it! Thanks for playing! Hope you enjoyed it!
Source: Author crumbworks 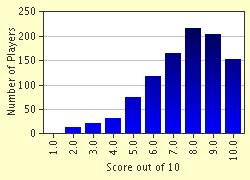 
Other Destinations
Explore Other Quizzes by crumbworks