Various internet resources have made available a plethora of Latin phrases for daily use. You've probably heard a few of these phrases before and may well be able to figure out the rest. And afterwards you can impress your friends!

Quiz Answer Key and Fun Facts
1. Your son's story about the roving band of gypsies that steal his homework is no longer eliciting laughs from his classmates nor dissuading the teacher from entering a "0" into her grading book. You advise him that when Ms. Simms asks him what happened to his math homework next time, to reply with an air solemn, aggrieved, resignation, "Canis meus id comedit." What have you advised him to tell his teacher? (Hint: A well-turned Latin phrase can be man's best friend.)

The 1999 BBC article entitled "Handy Latin Phrases" states, "There are two kinds of Latin speaker. There is the kind who slowly form an appreciation and understanding of the language, finding the right word to use and learning to conjugate verbs ... The second kind of Latin speaker just memorises lists of quotations, and merely uses them to impress." This quiz is designed to evaluate and assist that second kind of Latin speaker: the kind of person whose bumper sticker suggests "Sona si latine loqueris" - Honk if you speak Latin; the kind of person whose t-shirt informs the reader "Latine loqui coactus sum"- I have this compulsion to speak Latin. (http://www.bbc.co.uk/h2g2/guide/A218882)
2. You inform an overweight sedentary friend that they are a true "radix lecti". He seems pleased. According to the BBC's "Handy Latin Phrases", what have you called your indolent friend?

The plethora of sites that provide Latin phrases for contemporary use sometimes translate their Latin rather loosely. Although a "lectus" is certainly a Latin word for "couch", translating "radix", the Latin word for "root", as "potato", might be considered a liberal translation.
3. A friend is in a tight spot and craves your wise counsel or at least your favorite gratuitous platitude. After a pause that refreshes, you decide on the latter. You express your sentiments in Latin. "Res melius evinissent cum coca," you aver confidently. Your friend realizes that when it comes to your advice, it's the real thing. Of what have you reminded him?

Yuni.com maintains an extensive list of Latin phrases ranging from famous quotes by Ovid to Latinized phrases suitable for bumper stickers. The list is alphabetized by the first letter of the Latin quotation.
4. Knowing a few well-selected Latin phrases also allows one to speak out loud things one would normally have to mutter under one's breath. Which of the following indicates that you are finding a speaker odiously wearisome?

Loose translation renders the above phrases as follows:

"Te odeo, interfice te cochleare!" - I hate you. Kill yourself with a spoon.

"Caesar si viveret, ad remum dareris!" - If Caesar were alive, you'd be chained to an oar.

"Nihil curo de ista tua stulta superstitione!" - I'm not interested in your dopey religious cult.
5. Your son is starting to get the hang of inserting Latin phrases into everyday conversations. Facing your displeasure over the number of classes he's been cutting, he tells you philosophically, "Sic faciunt omnes." With what stereotypical rationalization are you being presented?

Chris Kawalek indicates that his online collection of Latin sayings has been amassed over an eight year period utilizing contributions from others: http://www.rktekt.com/ck/LatSayings.html
Among the utilitarian phrases on his site is "Da mihi sis cerevisiam dilutam" - I'll have a light beer.
6. Although you're generally a timid soul, you feel confident and assertive as you briskly march through the crowd in your favorite Latin t-shirt that reads "Recedite, plebes! Gero rem imperialem!"


Answer: Stand aside plebians! I am on imperial business!

The above t-shirt has been spotted on college campuses. Classics majors tend to score well in GRE examinations and a classics major is considered an asset for the purpose of gaining entry to medical school.
http://wings.buffalo.edu/academic/department/AandL/classics/why_major.html
7. Before committing this pithy Latin phrase to memory, I often found myself sputtering a lame "Oh Yeah!" when a harsh critic impugned my parentage. Now I adopt a supercilious countenance, chuckle indulgently and respond haughtily, "Mater tua criceta fuit, et pater tuo redoluit bacarum sambucus." Which of the following translates my rejoinder? (Hint: Think Python, think "Holy Grail".)


Answer: Your mother was a hamster and your father smelt of elderberries.

"Estne tibi forte magna feles fulva et planissima?" is the Latin phrase for "Do you by chance happen to own a large, yellowish, very flat cat?"
http://www.funehumor.com/fun_doc5/fun_0579.shtml has a fine collection of humorous Latin phrases.
8. Which of the following bumper stickers expresses the driver's sentiments regarding proscribing ownership of weapons and criminal activity and is most likely to be found on the back of a pickup truck with a gun rack ?

The above phrases could be translated:

"Si hoc adfixum in obice legere potes, et liberaliter educatus et nimis propinquus ades" - If you can read this bumper sticker, you are both very well educated, and much too close.

Instantattitudes.com sells a number of Latin bumper stickers including "Sona si latine loqueris". One of their t-shirts is emblazoned with the Latin for "You cannot know the power of the dark side".
9. When I feel the need to express my delight and astonishment at what I've just been told, I fear that in doing so I may lose my air of refinement and polish. That's why I'm inclined to exclaim, "Fac me cocleario vomere!". With what implement have I suggested retching be induced?

Do you often feel constrained in expressing enthusiasm or astonishment? Should you trot out a tired yet restrained cliché such as "truly remarkable", just let loose with a heartfelt yet plebian "awesome"? Use of a Latin phrase allows one to express enthusiasm with dignity. Who would ever suspect that "Fac me cocleario vomere" could be translated as "Gag me with a spoon"?
10. Latinization can even spruce up the title of a dopey sitcom about people marooned on an Island while out on a three hour tour. To which of the following shows do I refer?

"Insula Gilliganis" is "Gilligan's Island"; "Dies Felices" is "Happy Days"; "Zona Crepusculi" is "The Twilight Zone"; and "Id Castori Concedite" is "Leave It To Beaver".

Perhaps you're concerned about the difficulty in pulling off the pronunciation of these Latin phrases? Of course, you are unlikely to encounter people who have formal education in Latin and even Latin scholars have never heard a native Latin speaker. But if you are still worried, you may wish to know about "Veni, Vidi, Vici: Conquer Your Enemies, Impress Your Friends with Everyday Latin" by Eugene H. Ehrlich. The book includes guidance as to pronunciation.

Inspiration for this quiz was provided by AmoMerionesUnguiculatus.
Source: Author uglybird 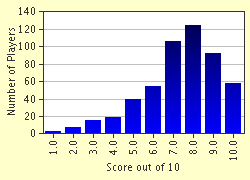