All about the tallest building in NYC.

Share on Facebook
Share on Twitter
Share by E-Mail
Author
patricksg741
Time
3 mins
Type
Multiple Choice
Quiz #
228,761
Updated
Dec 03 21
# Qns
10
Difficulty
Average
Avg Score
6 / 10
Plays
663
This quiz has 2 formats: you can play it as a or as shown below.
Scroll down to the bottom for the answer key.

Quiz Answer Key and Fun Facts
1. When was the Empire State building completed?

The World Trade Center was the world's tallest building for only a year, from its completion in 1972 to 1973, when the Sears Tower opened. The WTC was always the tallest in NYC (after the ESB), until its twin towers were destroyed in 2001. John Hancock Building is in Chicago, along with the Sears Tower.
4. How many storeys does the Empire State Building have?

5. What was the Empire State Building's nickname for many years after it opened?

It was called this for years after its completion because of the lack of occupants. It was completed when the Great Depression was approaching its lowest point.
6. What was the date that the B-25 Mitchell bomber crashed into the Empire State Building?

At 9:49 a.m. on Saturday July 28, 1945, a B-25 Mitchell bomber accidentally crashed into the north side between the 79th and 80th floors, where the offices of the National Catholic Welfare Council were located. The fire was extinguished in 40 minutes. 14 people were killed in the accident. The building didn't suffer much structural damage.
7. Who was the president when the Empire State Building was completed?

That is about 2 acres.
9. What is the address for the Empire State building?

Lexington Avenue is the Chrysler Building's address. And 67 Broadway is a random address.
10. Does the Empire State Building have colored lights turned on for holidays, etc?

The Empire state Building has three floors of lights. They are different colors for every holiday, ex red, white and blue for the 4th of July.
Source: Author patricksg741

This quiz was reviewed by FunTrivia editor bloomsby before going online.
Any errors found in FunTrivia content are routinely corrected through our feedback system.
Most Recent Scores
Jan 01 2023 : Guest 58: 10/10
Dec 14 2022 : Grosshaus93: 7/10 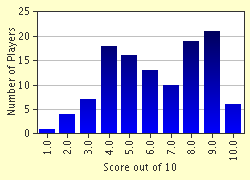 Related Quizzes
1. Match the Tower to its Country Easier
2. The Empire State Building Easier
3. All Along The Watchtower Easier
4. On Top of the World: Petronas Towers Easier
5. High Hopes Average
6. 'LEGO' My Skyscraper Average
7. These Ten Tall Towers Average
8. Towering Over the World Average
9. Towering over the UK Average
10. Two Days in London: One Skyscraper at a Time Average
11. Eiffel Tower Average
12. Scrapers of the Sky Average


Other Destinations
Explore Other Quizzes by patricksg741