This quiz is about structures that are (or were) the tallest of their kind in the world. Enjoy!

Dubai certainly loves its tall buildings. The Burj Khalifa is the record-setter, at an amazing height of 828 m (2717 feet). Including the Burj Khalifa, the city of Dubai has an incredible 7 of the 40 tallest buildings in the world. I've never been, but I imagine the cityscape there is awe-inspiring.
2. Dubai is a city absolutely fascinated with heights--engineers there have constructed several absolutely massive buildings, many of the tallest in the world. Adjacent to the tallest of these buildings, there is a decorative structure which is also the tallest of its kind in the world. This beautiful structure is over 275 meters (900 feet) long, can be as high as 150 meters (500 feet), and is the centerpiece of several differing shows and performances. What is this structure?

The Dubai Fountain, the largest fountain on earth, is located near the Burj Khalifa, the tallest building in the world. The fountain shoots up to 83250 liters (22000 gallons) of water as far as 150 meters (500 feet) into the air--the water itself reaches the height of a 50-story building! There are many performances done by and with the fountain, often as a "dancing fountain" with a light show and synchronized to music.
3. Changing from the modern to the ancient, which of these wonderous structures still qualifies as the tallest tomb in the world?


Answer: The Great Pyramid of Giza

The Great Pyramid (or Pyramid of Cheops, or Pyramid of Khufu) was the tallest man-made structure in the world for nearly 4000 years, until it was finally surpassed in the 1300s by Lincoln Cathedral in England.
4. Tall buildings are impressive, but it might be stretching it to call them "fun." Conversely, the structure Kingda Ka which is located in New Jersey, USA, became in 2005 the world's tallest of what kind of entertaining structure?

Kingda Ka was opened to the public in May of 2005, but has unfortunately been plagued by mechanical difficulties (thankfully, appropriate safety precautions uncovered all problems without passengers aboard) and has spent significant time under repair. It initially had a problem involving the launch cable and brake fins, and later on, the ride was seriously damaged by a lightning strike. It was repaired and running smoothly again by the end of the 2009 season.
5. Construction of the world's tallest tower using a common but unexpected building material was completed in 2008. It stood at a height of over 29 meters (96 feet), but what was this tower made of?

The world's record for the tallest Lego tower was broken at Lego Land in Windsor, England. To build it required a crane, 465,000 Lego bricks, 8 supporting wires to hold its parts in place, and reportedly a lot of patience.
6. One has to credit residents of Bethel, Maine (USA) for resiliency - they turned a miserable season into a world record. In 2008, Bethel residents created "Olympia," a 37-meter (122 foot) construction made of what material?

During the middle of a miserable winter, with fuel costs high, loads of snow, and temperatures low, residents of this Maine town got together and built an amazing snow-woman, complete with arms made of 8-meter (27-foot) evergreen trees, a 30-meter (100-foot) red scarf, and giant wreaths for eyes.

My favorite statistic about Olympia is that she was just about 9 meters (30 feet) shorter than the Statue of Liberty - but to me, the whole story is a great one.
7. On to something a bit more useful. The Nurek Dam, at 300 meters (984 feet) tall, was at its construction in 1980 the tallest dam in the world. It produces enough electricity to sustain nearly the entire country. In what country is it located?

The Nurek Dam was completed in 1980 by the Soviet Union, at which point Tajikistan was one of the USSR's republics. It is located in the Vakhsh River, and indeed produces enough electricty to sustain 98-99% of the country.

Interestingly, another dam in the Vakhsh River in Tajikistan (the Rokun Dam) has been proposed and is under construction, which could end up surpassing the Nurek in height. The plans for the Rokun Dam, however, are surrounded by controversy and mired in politics, so it is unclear at this point in 2010 which dam will be the tallest in the world. That said, either way, Tajikistan will hold the title.
8. In my personal opinion, the dome is one of the most elegant and beautiful architectural achievements. Which of these famous buildings houses the tallest dome in the world (measured by internal height)?

St. Peter's Basilica, designed by Michelangelo, reaches a maximum internal height of 118 meters, which is the tallest in the world. I find it fascinating how many buildings that have high religious significance are capped by a dome, but I certainly can't give a reason for this. They are beautiful buildings though.
9. Okay, this one isn't a structure--but it certainly qualifies for those who have "high hopes," and it's definitely trivial. Guinness has certified ladies' clothing manufacturer LadyBWear Limited of Cheshire, England as making the highest of this women's clothing article in the world. What is it?

That's right--Guinness has a category for "highest high heels," (available for commercial purchase). And high they are--40.5 cm (16 inches) with a 28 cm (11 inch) platform. I can imagine elegant ladies everywhere strolling (stumbling, falling) out for a night on the town in those puppies.
10. And to finish out the "high hopes" of our engineers, which of these amazing lighthouses was the tallest of its kind for hundreds of years?

The amazing Lighthouse of Alexandria, ancient Wonder of the World, was the tallest lighthouse built for many years. Its exact height is unknown, but estimates range from 120 to 140 meters (393-450 feet). It was, sadly, destroyed by earthquakes in the 14th century.

Each of the other lighthouses listed is the tallest in its respective country. The Yokohama Marine Tower is the tallest standing in the world, at 106 meters (348 feet). It is an unusual-looking steel structure, that originally had green and red lighting up the steel shaft (the lighting has since been changed to all white).

The tallest "traditional" (i.e., made of stone) lighthouse in the world is Ile Vierge, in Plouguerneau, France. It stands an impressive 82 meters (269 feet) tall.
Source: Author avrandldr 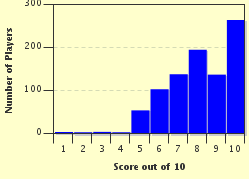