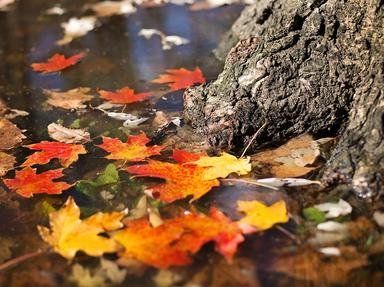 As a follow-up to my two Halloween quizzes, I thought I'd do one about that joyous time of the year where you pack on a few extra pounds while spending time surrounded by the ones you love. Have fun!

Quiz Answer Key and Fun Facts
1. What bird is typically the meal of choice when it comes to Thanksgiving in the U.S.?

Some have chicken, some have duck, some have no bird at all...It varies from person to person.
2. What is Thanksgiving called in Canada?

Yep, the same name only not on the same day. The Canadian Thanksgiving is celebrated on the second Monday in October.
3. A horn-shaped basket portrayed with fruits and vegetables inside is called a __________?

It's pretty common in decoration and as a centerpiece.
4. Sweet potatoes are often called by what name in parts of North America? Confusingly, this name is also given to a completely different vegetable.

The orange sweet potato (Ipomoea batatas) - also sometimes referred to as a yam by some Americans - is botanically quite separate from the proper yam, which covers various members of the Dioscoreaceae family.
5. In what now-named state is Plymouth Colony?

Plymouth Colony is where the first American Thanksgiving was celebrated in 1621.
6. Here's a bit of a toughie: What was the name of the tribe of indians that brought gifts of food to the Pilgrims?

All of these were tribes in Northeast America, but the Wampanoag were the indians that brought food to the Pilgrims.
7. During what war did the president at that time declare a day in November Thanksgiving Day?

The president at that time was Abraham Lincoln. He declared it a holiday to bolster the Union's morale, but it wasn't until AFTER the war that Congress recognized it as a national holiday.
8. What department store holds an annual Thanksgiving Day Parade?

By 1934, the Macy's Thanksgiving Day Parade attracted more than one million spectators each year.
9. Pie. Yummy. What kind of pie is traditionally served at a Thanksgiving Dinner?

As with the turkey/chicken/etc. thing, anything goes here as well. It's just that TRADITIONALLY pumpkin pie is the dessert served for Thanksgiving.
10. In the U.S., Thanksgiving falls on the fourth _______ of November each year. 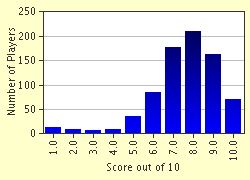 Related Quizzes
1. A Kwiz about Kwanzaa Average
2. Some Secular December Holidays Easier
3. How High Can You Build It? Easier
4. It's a Jolly Holiday in November! Easier
5. Not Another Holiday Quiz Average
6. The Day After Thanksgiving Average
7. December Isn't Just For Christmas! Average
8. Tales of the Yule Log Average
9. Remember, Remember the Fifth of November Average
10. Merry Christmahanakwanzika Average
11. The Month of December Easier
12. And Then You Celebrate! Average


Other Destinations
Explore Other Quizzes by sassy111