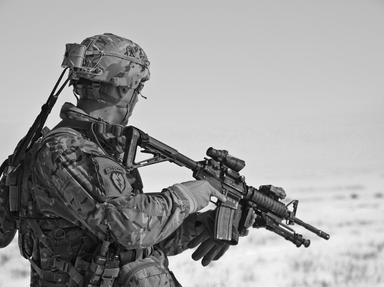 History of the Tank Trivia Quiz

Time to see what you know about tanks.

Quiz Answer Key and Fun Facts
1. Who first came up with the idea of the tank?

Yes, in fact this Florentine sketched out a design for a prototype; however, without self-propulsion, it wasn't much good. Not until the invention of the internal combustion engine was the tank practical.
2. Where were the first tanks built in the twentieth century?

The man generally credited with inventing or inspiring the tank is Lt.-Col. Ernest Swinton (of the Royal Engineers). He had, however, to rely for funding on the Royal Navy, which set up a "Landships Committee" to oversee the project.
3. What year were tanks first used in combat?

It was September 15th 1916, at the Battle of the Somme. Only forty- nine tanks were deployed, and only thirty two actually took part in the battle. These first tanks were clumsy and awkward, often getting stuck, and only nine made it across the trench line.
4. What was the difference between 'Male' and 'Female' tanks?

Yes, and I think we all know how they came up with the name.
5. At which place, and in what year, did the first major large-scale tank attack take place?

The Battle of Cambrai, which lasted from November 20th to December 3rd 1917, saw nearly five hundred British tanks smash through the German line in a sharp echelon formation. The campaign, however, was a failure, for the troops failed to take advantage of the breakthrough.

The very first use of tanks took place during the Battle of Flers-Courcelette in 1916, but not very successfully; most of them broke down.
6. When and where was the first engagement to pit tanks against other tanks?

April 24th to be exact. Three British Mark IVs ran into three German A7Vs along the Western Front. It was only a brief skirmish, but the first nontheless.
7. Where were the first American-built tanks used in combat?

Soviets were allowed to use a great deal of American-built equipment through the lend-lease act. They were probably not great enough in number to make any sort of impact on the German-Russian campaign.
8. Early German tanks were inferior to many other nations tanks of World War II, and had to make up for it with good tactics and communication.

Yes, in fact the Germans were by far outgunned in many of their bliztkrieg campaigns. Many of their panzer divisions were even made up of training tanks that could only carry miniscule machine guns.
9. Where was the first battle of World War II in which American built and manned tanks were involved?

Eisenhower was badly beaten by Rommel in this battle. It is also called Kasserine Pass, either name is correct.
10. Where was the largest tank battle in history?

This battle was part of the Soviet counterattack after Stalingrad.
11. About how many tanks took part in the largest tank battle?

The Soviets surrounded and outgunned their German assailants, spurring the long retreat back to Germany.
12. How many hours of training were Soviet tank operators given during World War II?

Yes, well, the Soviet Union really didn't have time to spare during Operation Barbarossa.
13. What nation built the largest tank?

This gargantuan machine, the Maus, weighed over 188 tons, and had up to 24 centimeters (just under 9.5") of armor. It was built by Ferdinand Porsche, the same man who designed the original Volkswagon and whose son designed the Porsche automobile. Only two of these tanks were ever made, one of which is still intact and on display at the Kubinka Tank Museum in Russia.
14. American M1 Abrams can use guided missile weaponry.

The original did not, but has been modified and improved to accept MRM-CE/KE Missile weaponry.
15. M2 Bradley tanks can float.

Yes, well, they are built to anyway. I wouldn't recommend trying it, though.
Source: Author stra0481 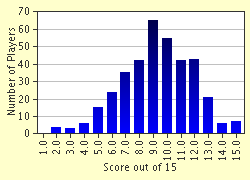 
Other Destinations
Explore Other Quizzes by stra0481