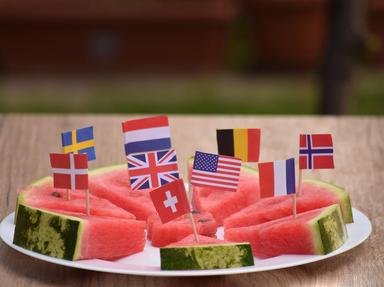 What words spring to mind when you think of Canada? Moose? Hockey? Beavers? They aren't the only plants or animals which represent Canada - each province has its own natural symbols. Here are some of them.

Also known as the northern diver, the common loon is also the state bird of Minnesota, and appears on both the Minnesota state quarter and the Canadian one dollar coin, or 'loonie'. The loon shown here has the typical black and white breeding plumage; non-breeding adults are more of a brown colour.

They breed in cold areas such as Svalbard, Alaska and some parts of Scotland, but when flying south for winter, they can range as far as Morocco.
2. The provincial flower of Quebec used to be the madonna lily, but it was replaced by the blue flag iris instead. Of which US state is the blue flag iris - also known as the purple iris - also a symbol?

The 'clajeux', as it would be called in French, is native to Canada and North America, and grows near water, in marshes and on river banks. As it is native to Quebec and the madonna lily is not, the iris was chosen as a replacement. It is also known as the harlequin blueflag and the poison flag.
3. This dog represents Nova Scotia, and - as its name suggests - was bred to catch a certain type of bird for hunters. What bird is this?

The Nova Scotia duck tolling retriever, to give it its full name, is a small gundog used to lure ducks and other waterfowl into gunshot range, a practice called 'tolling'. Its orange-red and white coat give it a fox-like appearance. If you're around one, you might need earplugs - like the shiba inu and Italian greyhound, it makes a distinctive high-pitched screaming noise when it is excited.
4. This little bird is a symbol of New Brunswick, and is also the state bird of Maine and Massachusetts in the US. What is its name? (Hint: look at its head.)

The black-capped chickadee comes from the tit family, and gets its name from its black head and the sound it makes. It has at least thirteen different types of vocalisation, including a two-note whistle and a gargling noise made to warn off other territorial males. It is one of the few birds that can reduce its body temperature in winter, as a means of conserving energy.
5. This owl is the provincial bird of Manitoba, and is one of the largest species of owl in the world. What kind of owl is it?

Also known as the sooty owl and the bearded owl, the great grey owl's most distinctive feature is the grey circles on its face, giving it a very serious look. Although a few of these owls live in warmer climes, they can more commonly be found in woodlands or taiga forests. Instead of building its own nests, it uses nests built by larger birds, such as eagles.
6. British Columbia's provincial animal is the spirit bear and its bird is the Steller's jay, and it's also one of the provinces to have a province fish - and a tasty one, at that. What kind of fish are these?

The Pacific salmon comes from the Oncorhynchus ('hook nose') genus, so called because of its hooked jaw, known as a kype. They migrate, die after spawning, and range as far as Beringia, between Canada and Russia, and Mexico. Alberta, Manitoba, Nova Scotia and Saskatchewan also have provincial fish, as do the Northwest Territories (another salmon, incidentally, called the Arctic grayling).
7. 'Anne of Green Gables' was set on Prince Edward Island, and Anne Shirley herself would have approved of the name of its provincial flower. What flower is this?

Anne Shirley has a habit of giving picturesque names to places and things, and 'lady's slipper orchids' certainly sounds like something out of one of L M Montgomery's books! It's named for the shape of its flowers, which have pouches that trap insects.

Incidentally, the other choices are all references to the 'Anne' series - amaryllis, the only other real plant, is a reference to Marilla Cuthbert, who adopts Anne; Dryad's Bubble is a name Anne made up for a place in the forest; and 'Rainbow Valley' is one of the later books in the series.
8. This deer is native to the Americas, but has also been introduced to countries as diverse as New Zealand, the Bahamas and Finland. It is also the provincial animal of Saskatchewan. Its Latin name is Odocoileus virginianus, but can you tell me its English name?

The white-tailed deer is a state animal of several US states, and appears on the coat of arms of Vermont. It is also the national animal of Costa Rica and Honduras, and a symbol of the Pirkanmaa region in Finland. Texas has a particularly large population of white-tailed deer, estimated to be around four million. Conversion of land for agricultural use has encouraged the white-tailed deer to spread further north in Canada and the US.
9. 'Moose, Moose, from the land of pine and spruce, tingly, heady, rough and ready...' runs the jingle from a beer advert in 'The Edible Woman' by Margaret Atwood. This pine tree is the provincial tree of Alberta, but what kind of pine is it?

Also known as the twisted pine, the lodgepole pine grows near ocean shores and in mountainous forests. Its wood is often used in construction, and it gets its name from its use in making poles for tipis. Its lightness and length also makes it convenient to transport over long distances.
10. This grouse, or ptarmigan, is one of the symbols of Newfoundland and Labrador. What type of grouse is it?

Also know as the red grouse in Britain, the willow ptarmigan lives in forests (especially pine and birch), moorlands and tundra. It is also the state bird of Alaska. Its name comes from a Scottish word, tŕrmachan; the P was added because the bird was mistakenly thought to be Greek. It is bigger than the rock ptarmigan and has a thicker bill, and is the most numerous type of ptarmigan.
Source: Author Kankurette