Did you know there are over 100 Colleges and Universities that begin with the letter "O" in the United States? Can you identify 10 of them from the clues?

Quiz Answer Key and Fun Facts
1. As of 2012, which of the following Ohio Universities boasts the largest campus enrollment in the United States?

The Ohio State University is based in Columbus Ohio. The college has over 50,000 students that study on campus, of which over 70% of them are undergraduates. The school also offers over 170 different majors with the most popular being communications, business, social sciences, and biology. Ohio State University was founded in 1870 as a land-grant institution and was originally called the Ohio Agricultural and Mechanical College.

The campus of over 1,700 acres is home to over 1,000 student organizations and clubs.

The athletic teams, the buckeyes, have one of the best reputations of any school in the United States having won NCAA National Championships in football, baseball, and basketball. One of the most famous alumni athletes in OSU history is the great Jesse Owens who won four Olympic gold medals in the 1936 Berlin Olympics.
2. The state of Oklahoma is home to over 50 public or private colleges and universities. Which of the following schools is NOT located in the capital Oklahoma City?

Oklahoma Panhandle State University is located in Goodwell, Oklahoma. It was inaugurated in 1909 as the Pan-Handle Agricultural Institute. In 1921, the state legislature authorized a two-year college curriculum and the school changed its name to the Panhandle Agricultural and Mechanical College.

In 2012, the school had just over 1,500 students and is nationally respected for its championship rodeo teams.
3. Staying in Oklahoma, which school is home to the famed Cowboys and Cowgirls, and "America's Greatest Homecoming Celebration?"

Founded in 1890, Oklahoma State University in Stillwater has emerged as one of the most popular colleges in the country. Over 20,000 students attend classes annually on the campus in six colleges and 200+ different majors. Historically, OSU has garnered national and international awards for programs in Agricultural Sciences, Architecture, Engineering, and Veterinary Medicine. Oklahoma State University also has a rich tradition in collegiate athletics.

The Men's Basketball team earned Final Four berths in 1995 and 2004 and were the first ever back-to-back NCAA Basketball champions back in 1945-1946.

In wrestling, the Cowboys have won a remarkable 34 NCAA team wrestling titles and had 127 individual champions.
4. Which of the following is a small liberal arts school in Atlanta, Georgia and home to the International Time Capsule Society?

Oglethorpe University was founded in 1835 in the Brookhaven suburb of Atlanta. The University is named for James Edward Oglethorpe, founder of the state of Georgia. The student population remains fairly constant with around 1,000 students on the 100 acre campus. Subjects studied at Oglethorpe include Accounting, American Studies, Art, Biology, Business Administration, Chemistry, Communications, Engineering, English, History, International Language Studies, Math, Physics, Social and Behavioral Sciences, and Theater. Oglethorpe University is also home to the Crypt of Civilization a "Guinness Book of Records" time capsule due to be opened in 8113 AD. The University houses the International Time Capsule Society and acts as a repository of other time capsule projects worldwide.

Oakland University is located in Rochester, Michigan. Oakton College is found in Des Plaines, Illinois and Olin College is based in Needham, Massachusetts.
5. Which of the following Ohio colleges was historically the first to admit women?

Founded in 1833, Oberlin College is a private liberal arts college located in the small town of Oberlin, Ohio. Despite being a small college (enrollment under 3,000), Oberlin has a proud and ground-breaking history. In 1835, it was the first U.S. college to regularly admit African American students. Nine years later, Oberlin College graduated its first black student. George B. Vashon would later become the first black lawyer to successfully be admitted to the Bar in New York State and one of the founding professors of Howard University. In 1837, Oberlin admitted its first class of four women and has the proud distinction of being the first and longest serving institution of co-education in the United States. Other significant Oberlin facts include the Oberlin Conservatory of Music which is the oldest of its kind in the U.S., and the fact that no other liberal arts college in the nation has a greater number of alumni with PhD's.
6. What charismatic Christian university, the largest of its kind in the world, is based in Tulsa, Oklahoma?

Oral Roberts University was founded in 1963 by the late evangelist, Oral Roberts. In 2012, the student population totaled a little under 4,000. The school has over 60 different degree programs as well as masters and doctoral options. The undergraduate degree tracks include: behavioral sciences, biology, business studies, chemistry, communication arts, computer science, education, engineering, English, history, humanities, nursing, physics, and religious studies. The sports teams at Oral Roberts are also very successful with the men's and women's basketball teams regularly making it into the NCAA tournament and the men's baseball team regular conference champions and College World Series participants.

Olivet Nazarene is a small college located in Bourbonnaise, Illinois. Olive-Harvey College is in Chicago, Illinois, and Our Lady of the Lake University can be found in San Antonio, Texas.
7. Which of the following is an Arkansas school that takes its name from the nearby river, that takes its name from a former Native American tribe that used to live along the river?

Ouachita Baptist University is located in Arkadelphia, Arkansas and was established in 1886. The original location for the college was on the former campus of the Arkansas School for the Blind which relocated to Little Rock. The Eastern boundary of the campus is formed by the Ouachita River, hence the name of the college. There are over 60 degree programs within 8 schools at Ouachita Baptist University: Business, Christian Studies, Education, Fine Arts, Social Science, Natural Sciences, Humanities, and Interdisciplinary Studies. Notable alumni include Mike Huckabee, past Arkansas Governor and Presidential candidate, and Julius Pruitt, a wide receiver for the Miami Dolphins.

Olney Central College is located in Olney, Illinois. Odessa College is found in Odessa, Texas. Finally, Oglala Lakota College is a collection of institutions in close proximity to Rapid City, South Dakota.
8. Which of the following Californian colleges, nicknamed "OXY" by students and alumni, is one of the oldest liberal arts colleges on the west coast?

Interestingly it is not the one you would automatically think when you hear "Oxy!" Occidental College is located in a suburb of Los Angeles and was founded on April 20th, 1887. The curriculum at Oxy is basically spread amongst three major divisions: Sciences, Social Sciences, and Arts & Humanities.

The program at Occidental is considered rigorous and all students must complete a Senior Year Comprehensive Examination within their major area of study. Famous alumni include none other than 44th President of the United States, Barack Obama. President Obama attended Occidental College for two years before transferring to Columbia.

Other alumni include actors Luke Wilson, Ben Affleck, Joanna Gleason, and Emily Osment.
9. Which of the following institutions of higher learning also shares its name with the nickname of the state it is found in?

Old Dominion University takes its name directly from the nickname King Charles II of England bestowed upon Virginia for staying loyal to the crown during the English Civil War. The college was first established in 1930 as the Norfolk division of the College of William and Mary. By 1962, it officially became Old Dominion College and began conferring 4-year degrees. In 1969, its name was changed to Old Dominion University. Over the course of the early years of the 21st century, Old Dominion University has become one of the largest providers of online distance-learning education in the United States.

Former President Jimmy Carter and acclaimed poet Maya Angelou both attended Old Dominion for a time period. Other famous alumni include astronaut Michael Bloomfield and 2008 Olympic 400m gold medalist Lashawn Merritt.
10. Which Pacific Northwest school is known as the "Beavers" and has been recognized as having the top forestry education program in the United States?

Oregon State University (another OSU) is a public land-grant university located in Corvalis, Oregon. The college serves over 25,000 students across 200+ Academic programs and majors. Top tier programs nationally include forestry, zoology, biochemistry, food science, pharmacy, ecology, nuclear engineering and oceanography. The Carnegie Foundation also considers Oregon State as a top-tier research institution. It is one of only two schools (the other being Cornell) in the country that have sea-grant, space-grant, land grant, and sun-grant designations.

The other schools mentioned above include Ottawa University in Ottawa, Kansas, Olympic College in Bremerton, Washington, and Oregon Institute of Technology in Klamath Falls, Oregon.
Source: Author coachpauly 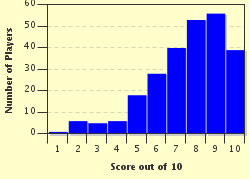 Related Quizzes
1. Where's The College Located? Average
2. Where Is This University? Average
3. Where in the U.S. Are These Colleges? Average
4. Where Are These Schools? Average
5. Ivy league Plus Two Locations Very Easy
6. What's the Right US University for Me? Easier
7. I Need Some Friends Easier
8. University of Texas Pride and Craziness! Average
9. The Ivy League Difficult
10. Colleges/Teams of the South Eastern Conference Easier
11. Locate the College Average
12. Go, State! But Where? Average