Where Are These Schools? Trivia Quiz

Pick the city where these colleges are located (or the closest city).

Gonzaga was founded in 1887 and it is affiliated to the Roman Catholic church.
2. In which city would you find Baylor?

According to its website Baylor is the largest Baptist University in the entire world. Baylor was chartered in 1845 by the Republic of Texas and is the oldest university in Texas.
3. Where is Rice University?

William Marsh Rice put together information on a charter for the William Marsh Rice Institute for the Advancement of "letters, science, and art" before his death.
4. Which of the following universities is not in or near Chicago?

The American Conservatory of Music and Loyola are both in Chicago and Northwestern is in Evanston, very close to Chicago. Howard is in Washington D.C.
5. In which city could you find Emory?

Emory is located in Atlanta. It was founded in 1836. Emory was ranked as one of the top twenty national universities by US News.
6. Where is Vassar located?

Vassar College was founded in 1861. Over 98% of students at Vassar live on campus.
7. Where is Brigham Young University?

BYU was named after Brigham Young, a former president of The Church of Jesus Christ of Latter-Day Saints. The university was established in 1875.
8. Where can you find Rollins College?

Located in Boulder, Colorado, Naropa University is based on Nalanda University. Nalanda flourished in India from the 5th to the 12th centuries. At Nalanda University, Buddhist philosophy and the discipline of meditation provided the environment in which scholars, artists and healers from many Asian countries and religious traditions came to study and debate. Nalanda is known for its joining of intellect and intuition, and for the atmosphere of mutual appreciation and respect among different contemplative traditions. This was the inspiration for the development of Naropa University.
10. Where is Auburn University?

Auburn is located in Auburn, Alabama. Best known for its football program, Auburn plays in the SEC.
11. Where is Marquette University located?

Marquette was named after Father Jacques Marquette, but Martin J. Henni, the first Catholic bishop of Milwaukee, was the man who got it started. Marquette opened in 1881.
12. Duke University is in South Carolina.

Duke is located in Durham, North Carolina. Duke has well known men and women's basketball teams.
13. Where is Vanderbilt located?

Commodore Cornelius Vanderbilt gave one million dollars to found Vanderbilt in 1873.
14. Which of the following colleges is NOT in Pennsylvania?

Marshall is in West Virginia. Temple and Villanova are both in the Philadelphia area and Carnegie Mellon is in Pittsburgh.
15. Dartmouth is in New Hampshire. 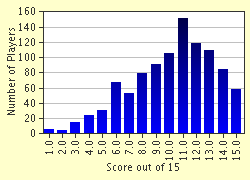 Related Quizzes
1. Where in the U.S. Are These Colleges? Average
2. Where is that College? Average
3. Locate the College Average
4. U.S. College Entrance Exams - Facts and Fiction Tough
5. US Colleges Difficult
6. Where Is This University? Average
7. Colleges and Universities Average
8. Where Did I Learn? Average
9. Ivy League Schools Difficult
10. US College Lists and Rankings Tough
11. Go, State! But Where? Average
12. Colleges of the Midwest Average


Other Destinations
Explore Other Quizzes by Sarah606