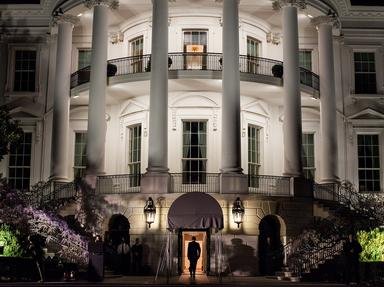 How much do you know about Presidential Pets? | Quiz

Most of the United States presidents have had pets during their life in politics. Some more than one, some could have opened a zoo. From the list of pets I give you, pick the correct president.

Quiz Answer Key and Fun Facts
1. This president had a series of horses for pets, including ones named Butcher Boy, Cincinnati, Egypt, Jennie, Julia, Mary, and St. Louis. One he named, rather ironically, Jeff Davis. He was close to this one, as it was his mount during his previous job in the US Civil War. Which president is this?

Ulysses S Grant brought all these horses to the White House with him, including his Civil War horse which he actually named after the elected president of the Southern states. Grant also had ponies named Billy Button and Reb, and two dogs named Faithful and Rosie.
2. This president had a series of dogs during his stint in the White House, none more famous than a Scottish Terrier named Fala. During a re-election campaign, Fala was lost near Alaska and the president did everything to find him, a task much more difficult in a non-cyber era. He also had a Great Dane named President, but you run out of names for your pets after your tenth year in office. Which president is this?

Franklin Roosevelt received criticism from the public, notably Republicans, about spending taxpayer money on something as trivial as retrieving a dog. He used this fodder in a campaign speech, saying he can tolerate lies against him in a campaign, but his "Scotch" dog cannot.

This part of the speech was well received by the voters and he was elected again for the fourth time. Fala went with him everywhere, and was buried next to FDR seven years after President Roosevelt died.
3. This president kept his pet list simple, getting a Portuguese Water Dog in his first term. His family decided to get a second dog of the same breed near the start of the second term he was elected. Bo and Sunny were the pets of which president?

Barack Obama's family named their first dog Bo, after the recently deceased blues singer Bo Diddley. Sunny and Bo remained fairly reclusive from the press, although Sunny had an reported incident where she bit a White House visitor on the face, requiring stitches.
4. This president owned several pets, mostly beagles. The most famous were two sibling dogs named Him and Her. The then vice-president got into some dubious press writings when he photographed picking Him up by the ears during a walk. Who was this president?

Johnson wasn't stellar at naming his pets; the father of Him and Her was named "Beagle". Him was the sire of two more beagles he owned (Freckles and Kim), after Her died after choking on a rock in 1964. Unfortunately Him died getting hit by a Secret Service car in 1966.
5. This president was the last to own cows on the White House grounds. Mooly Wooly and Pauline Wayne supplied the White House family with milk in his days in office. The collective presidential family didn't outweigh either of the cows, though some may imply this President may have outweighed them both by himself. Which president is this?

William Howard Taft was according to most accounts at least 300 pounds (136kg), and much of that milk the cows produced went to that not-so-svelte figure. In fact, Mooly Wooly was replaced by Pauline Wayne because Mooly didn't produce ENOUGH milk. Pauline Wayne stayed with the family even after the presidential stint, being shipped to Wisconsin.
6. This president was partial to several breeds of hounds. A handful of Black and Tan Coonhounds and American Staghounds dot his tenure, but it's a Greyhound named Cornwallis that the president didn't actually "beat". Also found in the presidential residence was a parrot owned by his wife Martha. Who is this president?

Washington didn't reside in the White House as his successor John Adams would be the first to do that. General Cornwallis was one of the Chief leaders of the British military in the American Revolution, and is whom the Greyhound was named after. Washington defeated General Cornwallis, we assume he didn't "beat" his dog of the same name. Martha Washington was the owner of the parrot, named "Parrot" (don't presidential families put ANY thought into their pets' names?).
7. This president had two main pets while in the White House. There was a dog named Grits that a teacher had given to them, but after some unruly behavior, the dog had to be removed from the White House. But the "First Daughter" Amy had a Siamese cat throughout their stay in the White House she named Misty Malarky Ying Yang. Which president is this?

Jimmy Carter's daughter Amy was only nine years old when she upped with her family and moved to Washington DC from Georgia. The family also had an Afghan Hound named Lewis Brown.
8. This president and his wife owned a Springer Spaniel named Millie, who during her time as "First Pet", became a New York Times Best Seller author. She was also referred to in re-election campaigns, when the incumbent stated, "My dog Millie knows more about foreign affairs than these two bozos", referring to his competition. Which president owned Millie the wonder dog?

Millie was the Bush's pet prior to George being elected. First Lady Barbara penned a book under Millie's name that told of her knowledge of White House life. One of the pups from Millie went to George W. Bush, George Sr's son, and he would become a resident of the White House starting in 2001.

His name was Spotty Fetcher, a play on one of George Jr's baseball players from his Texas Rangers team, named Scotty Fletcher.
9. This president had a plethora of pet animals, everything from dogs, cats, macaws and rats, all the way up to hyenas, bears and badgers. But holding the reputation of being the most outdoors-iest of all the presidents, you would expect quite a menagerie. Who is this president?

Roosevelt started out as a military leader, and then vice-president to William McKinley up until McKinley's assassination. His pets also included Bill the lizard, Emily Spinach the garter snake, Maude the pig, and Father O'Grady the guinea pig (one of five, and the other guinea pigs' names are quite unique,too).
10. This president had a series of four different breeds of dog leading up to his presidency, the most famous of which was a Cocker Spaniel named Checkers. This dog was one he had prior to his election as vice-president. Which president was this?

Checkers was a gift he had received during his campaigning with Dwight Eisenhower in 1952. During that period a fund was found that was linked to possible improprieties in reimbursement of personal expenses. Nixon took the time from the campaigning to go on television to state that none of the gifts making the fund were taken by him...save one.

The Cocker Spaniel that his kids had named Checkers was a part of the fund that he refused to return. This endeared him to his Republican backers and Eisenhower and Nixon won handily. Checkers never saw the White House, but Vicky, Pasha, and King Timahoe, his family's other three dogs, all did.
Source: Author Spaudrey 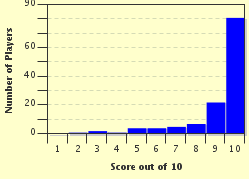