I'll show you some dots and dashes and you tell me what letter they represent in Morse code. Enjoy!

Quiz Answer Key and Fun Facts
1. What letter is represented by four dots?

Morse code is most often sent with a telegraph. Samuel Morse invented an electric telegraph in 1837 that could be used to send Morse code messages. Morse code can also be sent by flashes of light or sound.
3. Which of the following letters is seen here?

The first Morse code message was sent in 1844 from Washington D.C. to Baltimore, Maryland. The message was "What hath God wrought". Morse sent it as a demonstration for the U.S. Congress.
4. Which letter is this?

Along with letters, numbers and punctuation can be used in Morse code. Some of the punctuation includes a dollar sign, ampersand, and plus sign. An at sign (@) is made by putting together the letters A and C.
6. What letter is made by three dots?

The letter S is used in the message "SOS", which is one of the most common and well-known uses of the Morse code. The letter O is made with three dashes. Although SOS is often said to stand for "Save Our Ship" or "Save Our Souls", it actually doesn't stand for anything.
7. What letter is made with one dash?

The International Morse code was created in 1851. It is a modified version of the original code.
8. Which of the following letters is seen here?

Morse code has some prosigns, or letter combinations that stand for something. Some examples include BK, which means "break" or SN, which means "understood". SOS is also one.
9. What is this letter?

There have been extensions made to the Morse code for non-English languages. These include letters with accents.
10. What letter is represented by two dashes?

When Morse code was first invented, it was one of the only ways to send electronic messages. It was also used in wars as a message system. Today, it isn't used as often but is still used with CW radios and as navigation signals. Physically disabled people who cannot talk or use computers, can use it to blink or tap messages.
Source: Author zebra101 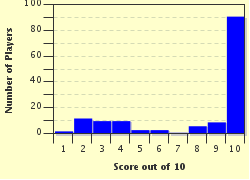