A Touch of Class: A Little Lesson in Braille Quiz

I have been asked many questions about Braille for all my life. This will give you a basic understanding of Braille and how it works.

Quiz Answer Key and Fun Facts
1. In what language was Braille first written?

Louis Braille was born in Coupvray, France, in 1809. He was blinded at age three, in an accident in his father's workshop. He eventually attended the only school for the blind in France, where he developed the Braille code. Not only was it less cumbersome than the embossed print letters used in the books in those days, but he and his fellow students were able to write. In the truest sense, Braille made blind people literate.
2. How many dots are there in a standard Braille cell?

The six dots are arranged in a rectangle, three dots high, and two dots wide. They are numbered one, two and three, going down the left, and four, five and six, going down the right. This makes communicating with a student much easier.
You can see a braille alphabet by going to: www.afb.org/braillebug/braille_print
3. Braille is usually presented on one side of a sheet of paper. What is the name for braille which uses both sides; braille is embossed on both sides of a page?

Interpoint reduces the thickness of a book by half. Interpoint is done on an electronic embosser which staggers the dots on the two sides of the page so that they don't "get in the way" of each other. I will admit to having a good deal of fun teaching sighted people about braille, and using a page in interpoint braille. If you use your eyes to read it, you can't tell which side of the page the dots are on.
4. Because Braille is larger than print, there is a way to shorten it. What are the shorteners called?

There are well over 200 contractions in literary braille, that is, braille in a standard book. It can be a bit daunting to a new student, especially an adult one! But, having learned it as a very young child, they are all second nature ... except, people keep changing them a little from time to time! There have been several major revisions to the Braille code throughout the years, so we who read it have to relearn some of the contractions.
5. One letter by itself can stand for a whole word! Which of these words does not have a one-letter contraction?

When Braille books were first made, there was the Bible, and a few religious books, and not much else. This accounts for the rather peculiar choices of what the letters can stand for. Still, knowledge really does seem a bit over the top, don't you think?

The word "time" uses two cells, dot five, then t. There are many such combinations, along with other "short-cuts".

Don't ask me, I just read and write the stuff! There is no logic to it, as far as I know. You can also use x in "it's" or "its". But, if you are writing the word "bit" or "pitfall", you must spell out the "it".
7. Which of these is not a contraction in literary Braille?

This also seems a bit odd to me, since "or" is not only used in many words, but is also a word in itself. Other combinations are st, and, th, ar, and many more.

The idea is that you read with your right hand, and use the left to confirm, and to drop down to the next line, making the movement more smooth. Many Braille readers, however, prefer to use only one hand and, often, it is not the dominant hand. Also, if you have read enough of it, you can read it with any finger of either hand in a pinch. Very useful if you have an injury to your preferred hand, or if you are carrying a baby, a few packages, and need to read the buttons on an elevator! Yes, I speak from experience!
9. Which of these is not commonly seen in Braille?

Grade One is simple letters, punctuation and numbers. It is used in some books for children, and in lesson books for adult students. It is also used commonly to label things like vending machines or ATMs. Grade Two Braille is used in most standard Braille books. It consists of the letters and numbers and punctuation, as in Grade One, and contractions/abbreviations.

Computer Braille is much like Grade One, but the punctuation is different, and the numbers are represented by the first ten letters, but lowered in the cell, so that dots one and four are omitted.

Grade Three Braille used to be used, mostly by college students, to take notes. The most common way to do this was to use a slate and stylus, a method which involves punching the dots out one at a time. So, the more contracted the braille, the less wear and tear on your hands. Nowadays, most students use some sort of high-tech notetaker, and Grade Three Braille has all but disappeared. I do admit to still using it, though, if I should be using a slate and stylus. The students of today mostly don't know it at all.
10. In 2009, the US government minted a coin with Braille on it to honor the 200th anniversary of its inventor. What did it say in Braille on the coin?

Brl is the contraction, in Grade Two Braille, for Braille. It is also small enough to fit on a silver dollar. Remember, I said the Braille is much larger than print. This was the first time I've ever seen Braille on a coin. I was enchanted!
Source: Author RachaelWarke 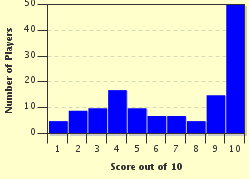 
Other Destinations
Explore Other Quizzes by RachaelWarke