This is Your Captain Speaking Trivia Quiz

Shipwrecks are some of the most deadly disasters in history. Listen... This is your captain speaking.

Quiz Answer Key and Fun Facts
1. This is your captain speaking: "Prepare to abandon ship." This famed ship ship sank during the night of April 14th-15th, 1912. Its name is well known but what was the name of its captain who ordered the lifeboats uncovered and the passengers mustered?

The Titanic was the largest liner of its kind and was designed to remain afloat with no more than 4 of her forward compartments open. The disaster occurred on the fourth day of its maiden voyage when the ship struck an iceberg causing five of the compartments to open. It did not take long for the crew to realize that the ship was bound to sink.

Captain Edward J. Smith started preparations to abandon ship. He ordered the lifeboats uncovered and the passengers mustered. He also ordered radio operators to begin sending distress calls. He was 62 years old and was the eldest of the captains for the White Star Lines.
2. The Vasa (Wasa) sank before hundreds or possibly thousands of persons who had gathered to see it set sail on its maiden journey in 1628. What type of ship was it?

The Vasa was indeed a great warship. It was built on the command of Gustavus Adolphus who was the king of Sweden at that time. The Vasa had sailed approximately 1300 km on her maiden voyage when the tragedy struck on August 10, 1628. It was reported that 30 persons died when the ship sank. In the end no one was blamed for the catastrophe.
3. The USS Arizona went down on December 7, 1941. What was the cause of its demise?

During the bombing of Pearl Harbour the USS Arizona was hit 4 times by Japanese bombers. The Arizona had been commissioned by President Franklin Roosevelt to Hawaii in a bid to discourage Japanese imperialism. A total of 1177 US Navy personnel died in the attack.
4. The sinking of the SS Sultana was recorded as the deadliest maritime disaster in the United States. Who was held accountable for this disaster?


Answer: No one was held accountable

Three of the four boilers of the SS Sultana exploded on April 7, 1865, causing the steam-powered paddle-wheeler to sink. The assassinations of Abraham Lincoln and his killer, John Wilkes Booth as well as the end of the Civil War caused the sinking of the Sultana to be overshadowed in the press at the time although it was the deadliest maritime disaster in US history. The death toll is said to be higher than that of the Titanic.

No one was held responsible for the tragedy. Although Captain Speed was found guilty of overcrowding the ship he was absolved by the judge advocate general of the army on the grounds that he had not placed any of the soldiers on the Sultana. The military did not try to implicate Captain Williams who was one of their own and Colonel Hatch quit the service so that he was no longer answerable to the military court.
5. The RMS Empress of Ireland collided with a Norwegian collier and sank in 1914. Which country owned this ship?

The RMS Empress of Ireland was built in Scotland but it was owned by the Canadian Pacific Steamship Company. It was an ocean liner which plied the North Atlantic route from Quebec to England. The collision was attributed to a dense fog. The collier did not sink but there was severe damage on the starboard side of the 'Empress' and she listed badly as water came rushing in.

The official death toll was 1,012. It is recorded as the worst Canadian maritime disaster with the largest amount of deaths in peace time.
6. What was the name of the carrack-type warship which sank in 1545 while in battle against the French?

The Mary Rose belonged to the English Tudor navy of Henry VIII. It was able to fire a full broadside of cannons. This ship was built solely for the purpose of war and never served as a merchant ship. It is interesting to note that the sinking of the Mary Rose was not because of any damage inflicted by the French. According to some sources, the Mary Rose had fired at the French and then turned sharply to fire again from the other side.

It was that sharp turn that is believed to have caused the ship to tilt so that enough water entered the gun ports to cause the ship to sink. Only 35 of the crew members were saved. In 1971 the wreck of the Mary Rose was found and the remains raised from the seabed.
7. This Canadian ocean liner shown sank during World War 1 while transporting Commonwealth troops. In which body of water did it sink?

The RMS (later HMT) Royal Edward was originally used for mail service. During World War 1 it was used as a passenger ship to transport Commonwealth troops. On August 13, 1915 it was hit by two torpedoes which were fired by the Germans. In 6 minutes the ship sank. An SOS was sent out before the ship lost power. The death toll was 935 and a total of 440 men were rescued.
8. On July 2, 1915 the SS Eastland sank causing the deaths of 848 persons. What was the strangest thing about the disaster?


Answer: The ship was still tied to the dock.

The SS Eastland was a passenger ship used in Chicago to take people on tours. On the morning of the disaster the ship was packed to its full capacity of 2752 passengers. Since it was somewhat top heavy because of the great number of lifeboats that were required crew members were in the process of trying to stabilize it while it was still tied to the dock.

While they were trying to balance the ship, people rushed to the port side which caused the ship to lean to the port and roll over on its side at the bottom of the river. The water trapped many person inside and some were crushed by the heavy furniture.

Despite being so near to the wharf and getting a swift response, the death toll was high.
9. Which famous explorer was aboard the Santa Maria when it ran aground in 1492?

The Santa Maria was the biggest ship in Columbus' fleet. It struck a sandbank in the vicinity of Haiti on the night of December 24, 1492 and sank the following day. Columbus had the timbers stripped from the wreck when he realized that the ship could not be fixed. They were used to build a fort called La Navidad. There are no reports of casualties.
10. Which king of England lost his only legitimate son and heir when the White Ship sank in the English channel on November 25, 1120?

William Adelin was the only son of Henry I. He was permitted by his father to return to England from Normandy on the White Ship along with others of the king's retinue. William had supplied the crew with much alcohol. After their revelling they ordered the captain to overtake the king's ship which had already departed.

In the dark the ship hit a submerged rock and capsized. William got in a small boat and set off to escape but returned to help his step sister. His boat was swamped and he drowned.

The period known as the Anarchy is attributed to his death.
Source: Author Verne47 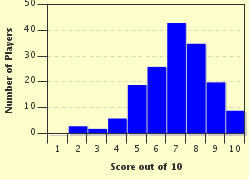 Related Quizzes
This quiz is part of series Commission #40:

This is what you're looking for, right? The fortieth Commission? This is where authors from the Lounge received titles containing the phrase 'This is...'. This Commission launched in January 2016.


1. Just What Do You Think This Is? Easier
2. This is the Army, Mr. Jones Average
3. Well, this is a First Average
4. This Is a Scam Average
5. This is Magnificent! Average
6. This is Your Captain Speaking Average
7. This Is Not A Game! Average
8. So This Is Heaven? Average
9. This is Togo Average
10. This Is a True Story Easier
11. This is Real Food Average
12. This is Not America Average