Up, Up and Away Trivia Quiz

Let's travel around the world and visit some of the tallest man-made structures on the planet...

Quiz Answer Key and Fun Facts
1. The prominent building on the left of the photograph became the world's tallest when it opened in 2004. On which island is it located?

Located in the Xinyi District or Taipei, the capital city of Taiwan, it was originally called "The Taipei World Financial Center" but it is now known simply as "Taipei 101". With 101 floors above ground (and five subterranean levels), Taipei 101 is 1,669.9 feet tall. There are indoor observatory decks on Floors 88 and 89 and an outdoor observatory on the 91st floor. The Observatory Restaurant is on floors 85 and 86.

Taipei 101 became the world's tallest building when it was opened on New Year's Eve 2004 and remained so until 2010. It was designed by Taiwan-based Chinese architect C.Y. Lee.
2. The spectacular Kingdom Centre is notable for the inverted parabolic arch that dominates the upper third of the building. In which country can you shop here?

The 65-floor, 992-foot tall Kingdom Centre houses a shopping centre as well as the Four Seasons Hotel and some of the world's most state-of-the-art apartments. Located on Al Urubah Road almost in the center of Riyadh, the capital of Saudi Arabia, visitors get a unique view of the city from the Kingdom Centre's 200-foot long "Sky Bridge", which straddles the building almost 1,000 feet above ground level. The Kingdom Centre is the world's third-tallest "building with a hole" after the "World Financial Center" in Shanghai, China and "Tuntex Sky Tower" (aka "85 Skytower") in Kaohsiung, Taiwan.
3. When it formally opened in 2013, which structure (pictured) became the tallest building in the European Union?

Originally named the London Bridge Tower, it is now called "Shard London Bridge", "Shard of Glass" or simply "The Shard". At 1,004 feet, the 87-storey skyscraper is the tallest building in the EU. Only the 1,084-foot Emley Moor transmitting station is a taller free-standing structure in the UK. The Shard has 72 habitable floors with an observation deck on the highest of those.

The Shard was 'topped out' in March 2012 and was therefore briefly the tallest building in Europe. Eight months later, though, the Mercury City Tower in Moscow reached its ultimate height (1,112 feet), thus claiming that mantle.
4. Opened in 1973, the 732-foot tall Carlton Centre (pictured) has been the tallest office building in Africa for more than 40 years. In which city is it located?

Located in downtown Johannesburg, South Africa, the Carlton Centre took six years to build -- the original Carlton Hotel was demolished in 1967 and it took two years just to complete excavations. The 50-floor tower stands 732 feet above street-level, but there are a further 115-feet subterranean and, indeed, 46% of the complex's floor area is below ground level.

Once the tallest building in the Southern Hemisphere, the observation deck on the 50th (and top) floor of the Carlton Centre is known as "The Top of Africa".
5. Opened in 1990, the BOC Tower (pictured lit at night) was the first building outside the U.S.A. to break the 1,000-foot barrier. Where is it located?

The tower itself rises to 1,033,5 feet with two masts on top stretching to 1,204 feet. When completed in 1990, the Bank of China Tower (or BOC Tower) was the tallest building in Asia, a record in held until 1992. One of the world's most recognizable skyscrapers, it is located at 1 Garden Road, in the Central & Western District on Hong Kong Island. Because of its 'futuristic look', the BOC Tower was used for exterior shots of 'Starfleet Communications Research Center' in the TV series "Star Trek Voyager".

The BOC Tower was designed by the legendary Chinese American architect I.M. Pei, the man widely known as the master of modern architecture. The first building outside the U.S.A. to top 1,000 feet, BOC Tower is now the fourth-tallest in Hong Kong, having been overtaken by "The International Commerce Centre", "Two International Finance Centre" and "Central Plaza".
6. The 64-story Torre Gran Costanera (pictured), completed in 2014, the second-tallest building in the Southern Hemisphere and the tallest in Latin America, dominates the skyline of which South American capital?

Construction on the Gran Torre Santiago at the Costanera Center complex in the Chilean capital began in 2006 and it was expected to be complete in 2010. Delays meant that it was a further four years before Latin America's tallest building was completed.

Topping out at 980 feet, the Gran Torre Santiago just surpassed the Eureka Tower in Melbourne, Australia to become the second-tallest building in the Southern Hemisphere. It relegated its 636-foot neighbor, the Titanium La Portada, completed in 2010, into second place in the list of Chile's tallest buildings. A similar fate was also suffered by the Twin Towers of Central Park at the Parque Central Complex in Caracas, Venezuela which, at 738 feet, which had been the tallest buildings in South America since they opened in 1983.
7. At a height of 1,972 feet, the Abraj Al-Bait Towers is both the world's tallest hotel and tallest clock tower. Opened in 2012, in which Middle East city is it located?

Also known as the Mecca Royal Hotel Clock Tower, the Abraj Al-Bait Towers became the world's second-tallest building when it opened in 2012 (although it has subsequently been overtaken by the 2,073-foot Shanghai Tower in China). The Abraj Al-Bait clock tower is not only the tallest, but also contains the world's largest clock face.

At the time of its opening, Abraj Al-Bait also had the largest floor space (16,150,000 square feet) of any structure in the world, surpassing Dubai International Airport, although the New Century Global Centre in Chengdu, China (with 18,300,000 square feet) which opened in 2013 has since overtaken it.
Located in the center of Mecca in Saudi Arabia, Abraj Al-Bait Towers is adjacent to Masjid al Hara, the world's largest mosque and Islam's most sacred site.
8. The 984-foot tall Abeno Harukas skyscraper which opened in March 2014 became the tallest building in which country?

Opened in 2014, the Abeno Harukas skyscraper was the final part of the Abenobashi Terminal Building, a multi-purpose commercial facility located in Osaka, Japan. The Abeno Harukas became Japan's tallest building by a margin of just 14 feet, surpassing the Yokohama Landmark Tower, which had held the record since 1993. Floors 58-60 house the "Harukas 300" observatory, whilst the Marriot's panoramic restaurant is on floor 57.

The complex houses the new Kintetsu department store (Japan's largest), the Marriott International hotel and the new headquarters of the Sharp Corporation as well as the new terminus station for the Kintetsu Minami-Osaka railway line.
Floors 58-60 house the "Harukas 300" observatory, whilst the Marriot's panoramic restaurant is on floor 57.
9. Dominating the pictured skyline, the 1,058-foot tall building known simply as "Q1" is the tallest residential building outside of the U.A.E. In which country can you live here?

Completed in 2005, "Q1" (short for Queensland Number One) is located in Surfers Paradise on Queensland's Gold Coast in northeastern Australia. At the time of its completion it was the world's tallest residential building. The 1,105-foot tall Marina Torch in Dubai surpassed it in 2011, and three other Dubai structures that rose even higher opened during 2012 (most notably the 1,358-foot Princess Tower). 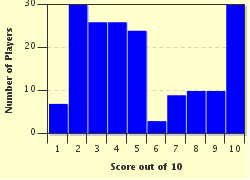 Related Quizzes
1. Match the Tower to its Country Easier
2. The Empire State Building Easier
3. All Along The Watchtower Easier
4. On Top of the World: Petronas Towers Easier
5. High Hopes Average
6. 'LEGO' My Skyscraper Average
7. These Ten Tall Towers Average
8. Towering Over the World Average
9. Towering over the UK Average
10. Two Days in London: One Skyscraper at a Time Average
11. Eiffel Tower Average
12. Scrapers of the Sky Average