There are many World Heritage Sites that we should probably visit in our lifetimes. Come "see" just a few of them.

Quiz Answer Key and Fun Facts
1. A World Heritage site since 1996, this region along Central America's coast is in the top three largest of its kind. This area, part of a larger system, is called what?

The Great Barrier Reef and New Caledonia Barrier Reef are located in the southernmost regions of the world (Australia/Melanesia). Pulley Ridge Reef can be found off the Florida mainland.

The Belize Barrier Reef is part of the Mesoamerican Barrier Reef System which extends from Cancun to Honduras. It is under threat from shipping, fishing and tourism, but mostly from "bleaching" (a result of hurricanes which kill off portions of the reef or make the coral susceptible to disease).
2. What convent was built in the District of Leiria, Portugal, near the site of the Battle of Aljubarrota in 1385, to commemorate the victory of the Portuguese over the Castilians and is now listed as a UNESCO World Heritage Site?


Answer: The Monastery of the Dominicans of Batalha

Mosteiro Santa Maria da Vitória, more commonly known as the Batalha Monaste, is a Dominican Convent. The convent was commissioned by John I to honor his victory and acknowledge divine help of the Virgin Mary. The battle ended the Castilian attempts to overtake the Portuguese throne and assured John as King of Portugal. The Monastery took over a century to build, beginning in 1386 and ending around 1517, spanning the reign of seven kings.

In the center of the chapel is the convent's most dramatic feature, the tomb of John I (Dom Joăo I) and his wife, Queen Philippa of England and sister of Henry IV. In one of the bays in the chapel walls is the tomb of one of their sons, Prince Henry the Navigator.
3. Senegal hosts this UNESCO World Heritage Site, that is an island and shares its name with the city the 2011 World Series of baseball champions hail from. Which island is it?

The Island of St. Louis lies at the mouth of the Senegal River, was colonized by the French in the 1600s and has characteristic colonial architecture. Its importance began as a trading hub for those going down the Senegal River. The island was a model for other areas in Africa that were combinations of locals and European traders. French military officer and Governor of Senegal Louis Faidherbe played a large role in how the Island of St. Louis was laid out. Faidherbe was very much anti-slavery and cared for the African people he was Governor of.
4. While perhaps not as well known as the Notre-Dame in Paris, where would you find the "Cathedral of Our Lady" that dates from the 12th century?

None of the wrong answers are old enough to qualify. The nave of this church was built in 1171 (on even older foundations). It has been a local heritage site since 1936 and a World Heritage site since 2000. In 1998 the church was significantly damaged by a tornado. Restorations have been ongoing and the main tower was stabilised in 2003.
5. Located in Indonesia, what UNESCO World Heritage Site is a National Park which derives its name from an island named after a giant lizard?

Komodo National Park consists of islands in which the giant lizards known as Komodo dragons, or Komodo monitors, live, and they can only be found in this area. The island terrain is mostly steep and rugged, ranging from beaches to hillsides of dry savannah. The Komodo monitors can be found on the islands of Komodo, Rinca, Flores and Gili Montang.
6. Which UNESCO World Heritage Site spans two South American countries?

The other selections are all UNESCO World Heritage Sites in South America, solely in one country.

The spectacular Iguazu waterfalls span the border between Brazil and Argentina, some are 3 kilometres wide and 80 metres high. The constant spray means a diverse selection of plants thrive and many endangered animals can be found there too.
7. What UNESCO World Heritage Site is in Belarus, with construction being initiated by the Ilyinichi family and shares part of its name with a Russian Space Station?

Started in the 15th century, this castle complex, which was begun in Gothic style, has gone through renovations using Renaissance style and Baroque style. The Radziwill family bought the castle in the 17th century and completed any unfinished work in Renaissance style. The grounds were damaged during the Napoleonic period and restored during the 19th century, adding a park among other things, making it more beautiful than imposing.

The Mir Castle Complex is located just off of the Miryanka River and near the Chapel Crypt of the Dukes of Svyatopolk-Mirsky.
8. First established around the 6th century BC by the Nabataean Arabs, this area consisting of temples, tombs, and other half-built buildings is carved out of cliffs. Featured in the film "Indiana Jones and the Last Crusade", what is the name of this famous World Site?

One of the worlds richest and largest archaeological sites, Petra has been a UNESCO World Heritage Site since 1985. The carvings in the sandstone give it the nickname of "The Rose Red City" (the Treasury building, usually represented as the final resting place of the Holy Grail, is the one most often seen in movies).

Situated between the Red Sea and the Dead Sea, an ingenious water management system allowed extensive settlement of an essentially arid area. The site has undergone many threats to its survival, including the collapse of ancient structures, erosion due to flooding, improper restoration of ancient structures and an unchecked rate of tourism.
9. Which UNESCO World Heritage Site consisting of nineteen islands off the coast of Ecuador was famously visited by Charles Darwin?

The Galapagos Islands have been referred to as a "Living Museum" and the site also includes a Marine Reserve. Darwin used the species on this island to confirm the theory of evolution. The most notable species on the island are the Giant Tortoise and numerous finches not found anywhere else in the world. Volcanic activity in the area and three ocean currents meeting at these islands make it that much more remarkable.
10. Having the title of the "World's First National Park" and designated as a World Heritage site in 1978, what location lists features such as an active volcano, approximately 10,000 thermal features, more than 300 geysers and one of the world's largest calderas?

Between 1,000-3,000 earthquakes take place annually within the park borders (approximately 3,472 square miles or 8,987 square km), which is a region larger than Rhode Island and Delaware combined. The Yellowstone Caldera measures 45 x 30 miles (72 x 48 km) and houses the majority of the park. In 2011, almost four million tourists visited this wonder-filled area.
Source: Author Jakeroo 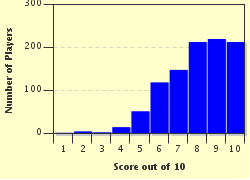 Related Quizzes
1. Man Made Structures, Part 1 Very Easy
2. Across Five Continents Easier
3. World Heritage Sites Easier
4. Where's Waldo?: Name That Location Easier
5. Yes We Can Easier
6. Pi's 'What's What' in Haiku Easier
7. Places I'd Like To Live Easier
8. Origin Countries of Famous Sites Easier
9. Are You Sure That's What It Is? Easier
10. Right Under My Nose Easier
11. The Key to the City Easier
12. Ten Places to Visit Before We Crack Easier


Other Destinations
Explore Other Quizzes by Jakeroo