The pictures in this quiz represent man-made edifices, structures or objects d'art from around the world. Do you recognise them?

Quiz Answer Key and Fun Facts
1. Construction of this beautiful building began in 1632 and was completed in 1653. What is it?

The Taj Mahal is actually a mausoleum, located in Agra, India. Constructed out of white marble, it was built in memory of Mumtaz Mahal, third wife of Emperor Shah Jahan, who died in childbirth. It houses the tombs of both Shah Jahan and his wife. During the almost 22 years of its construction, approximately 20,000 people worked on the structure.
2. The Great Sphinx was built between the years 2558 B.C. and 2532 B.C. What country is it in?

The Sphinx was built on the banks of the River Nile in Giza, Egypt. It was built during the reign of Egyptian Pharaoh Khafra, who was also responsible for the second pyramid at Giza. Believed to be originally built as a representation of the sun god, it was sculpted out of sandstone and faces the east, to meet the rising sun.

It has the face of the king and the body of a lion. It is 20 meters tall and 200 meters long. There are various stories about what happened to the nose. The fact that it is in as good condition as it is, is attributed to the fact that it was buried in sand (and protected from erosion) for a long time.
3. Is there anything that says France quite like this imposing structure? What is it?

The Eiffel Tower is located in Paris, France and is 324 metres high. When it was completed in 1889, it was the tallest man-made structure in the world. It held that title until 1930, when the Chrysler Building was built in New York.
The Eiffel Tower was built to be the entrance to The World's Fair, which also celebrated the 100th year anniversary of the French Revolution.
4. The unique appearance of this building, which opened in 1973, was designed to look like ships' sails. What building is this?

This performing arts centre sits in Sydney Harbour, hence the image of sails. It houses seven different venues, from a 2,679 seat concert hall, to a less formal, 210 seat room. The idea for the centre was first proposed in the late 1940s, construction began in 1959 and the opening, which was officiated by Queen Elizabeth II, was on 20th October 20 1973.

The original design was by Jon Utzon.
5. Lady Liberty, gracing the harbour of New York City, has long served as a symbol of American freedom. Which country presented the Statue of Liberty to the United States, as a gift?

Lady Liberty was designed by Frederic Bartholdi and presented to the people of the United States in October of 1886. The statue is that of Roman Goddess, Liberatas (the goddess of freedom) and the tablet she holds bears the date of the American Declaration of Independence.
6. This fortification was built to help keep its country safe from invaders from the north. What is it known as?


Answer: The Great Wall of China

The Great Wall of China is actually a series of walls, built at different times from around the 5th century B.C. and into the 16th century. Running from Shanhaiguan to Lop Nur, at 8,851,8 km in length, the Great Wall is actually made up of sections of wall (6,259.6 km), sections of natural defensive features (2,232.5 km) and trenches (359.7 km).
7. St. Peter's Basilica contains the bones of St. Peter. Where is it located?

St. Peter was considered the first bishop of Rome, and thereby the first pope. Many popes have also been interred here making it a very holy site.
While there has been a church at this location since the 300s, the basilica seen in the picture was completed in 1625 (having taken 120 years to complete).
Established in 1929, Vatican City is a walled enclave that is located in Rome, but is not part of Rome. It is a city/state of its own right.
8. The remains of this Incan city can be found on a mountain ridge 2,430 m above sea level. What is its name?

Machu Picchu was built around 1450, by the Incan Emperor Pachacuti. Most archaeologists believe that it was built for the emperor, as an estate, while others believe that it was a religious site. It was abandoned in 1572. There is evidence to indicate that the inhabitants were wiped out by smallpox, brought into the area by travellers.

The site is still largely intact, which makes it fairly unique, in terms of Incan artifacts.
9. The faces of four U.S. presidents look out at us in stony silence (sorry for the pun). What is the (one word only - Mount _______) name of the mountain on which they are carved?

Mount Rushmore is located near Keystone, South Dakota, and is part of The Black Hills. The concept of carving famous faces into the rocks of the mountains, to generate tourism, is originally credited to Doane Robinson. However it was the artist, Gutzon Borglum, who chose both the mountain and faces to be used. The presidents, from left to right are, George Washington, Thomas Jefferson, Teddy Roosevelt and Abraham Lincoln and their faces were carved between 1934 and 1939. Gutzon died in 1941, and his son, Lincoln, took up the chisel in his father's place.

However, due to a lack of funding, he was forced to stop before the carving could be completed to original design (all four were supposed to be seen from their waists up).
10. It's a tower and it leans, but what country is it in?

Pisa is located in the district of Tuscany, which is in Central Italy. The tower is the bell tower for Pisa's cathedral. Construction on the tower began in August, 1178. By the time the third floor was built, construction was halted because the tower had already begun to tilt.

This was due to both an inadequate foundation and being situated on unstable subsoil. For the next 100 years, the tower was largely ignored, as the area was in an almost constant state of war with neighbouring areas. This inadvertently gave the soil on which it was built time to settle. In 1272 construction started again, and subsequent floors were built with one side longer than the other. Construction stopped again in 1284, because of another battle.

The building was finally completed in 1319, not including the bell chamber and bells, which came later.
Source: Author skunkee 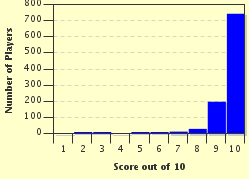 Related Quizzes
1. 9 for 10 - World Heritage Sites Average
2. A Journey to Tourist Attractions Around the World Tough
3. A Tea Time Quiz - Ten Cultural 'T's Average
4. Across Five Continents Easier
5. Are You Sure That's What It Is? Easier
6. Around the World by Landmarks and Tourist Sites Average
7. Around The World In A Few Seconds! Average
8. Around The World In Twenty Plays Average
9. Best Hotels In New York City Average
10. Destination Unknown Average
11. Did I Make a Wrong Turn? Average
12. Do You Know Where Your Children Are? Easier