This is my second quiz on this topic. Can you guess the meaning of these common international phrases that are often used in English?


Answer: How are you?

A common greeting among Spanish speakers, this phrase can be modified as "como esta usted?" (formal) or "como estas?" (informal). This is also the basis of the Filipino word "kumusta?" which is usually in the form of a question and also means "how are you?"
2. Most of us know that the "RSVP" at the end of each invitation asks us to reply or confirm attendance. But what does the acronym RSVP really stand for?

This French phrase literally means "please respond" and asks invitees to confirm their attendance to the invitation. RSVPs help ensure preparations are properly done prior to the event. I made up all the other three answers.
3. The 1989 movie "Dead Poets Society" helped popularize the English use of the Latin phrase "carpe diem". What is the translation of this phrase?

English professor John Keating, played by Robin Williams, uses the phrase to inspire his young students to aspire for more and "seize the day". His unorthodox methods leads his students to gain a greater appreciation for poetry and life in general.
4. "Aloha", which can mean "hello", "welcome", "love", and "goodbye" is arguably the most famous Hawaiian word. Another often-used Hawaiian word is "mahalo". What does "mahalo" mean?

The German word "doppelganger" is literally translated as "double goer" and is popularized in German folk tales as a ghostly copy of a living person which, when seen, is usually considered a harbinger of death or tragedy to the copied person.
6. "Safari" is a word which emanated from Arabic and Swahili origins. What is the literal meaning of this word?

The Arabic and Swahili origins literally means journey, which is a general term for any travel - whether by foot or by vehicle. Thus, the phrase "go on a Safari trip" is kind of redundant.
7. What does it mean when you hear someone did a "hara-kiri"?

This Japanese term literally means "to cut the belly," which is how the Japanese would perform ritual suicide, usually as a result of deep embarrassment or as a form of penalty for an irreparable mistake. As suicide is not as popular in other cultures, this phrase is often used metaphorically, as in committing "political hara-kiri" when someone makes an unpopular move.
8. What does the Italian word "arrivederci" literally mean?


Answer: To see each other again

This greeting has made its way to the English lexicon as a farewell greeting, but the literal translation from the Italian means: "a," - to; and "rivederci" - we see each other again. When someone tells you this during a parting he hopes to see you again in the future.
9. The lyrics of the song "Lady Marmalade", originally performed in 1974 by the group Labelle and revived in 2001 for the movie "Moulin Rouge" by Christina Aguilera, Li'l Kim, Mya and Pink, has the French phrase "Voulez-vous coucher avec moi?" What does this phrase translate to in English?


Answer: Do you want to go to bed with me?

This suggestively controversial line is repeated several times in the song, which was also covered by the group All Saints in 1998. I really find it amusing hearing ladies sing the phrase without actually knowing the meaning of the lyrics.
10. Arguably the most popular Swahili phrase in common use is this phrase popularized by the 1993 Disney classic "The Lion King". According to the song, "...it means, 'no worries'" What is this phrase?

Timon and Pumbaa sings the song to cheer up young Simba in the early part of the movie. "Jambo bwana" means "Hello mister" while "Choo kiko wapi" means "Where's the toilet?" "Ninakupenda" is Swahili for "I love you".
Source: Author aircorwin 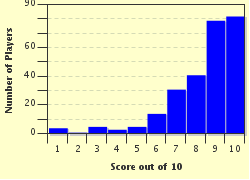 Related Quizzes
1. Afrikaans to Zulu Tough
2. Country Names in their Native Languages Easier
3. Racing Through World Languages Easier
4. When Cats Attempt to take Over the World Average
5. Fanatics Cheering Around the World Easier
6. Dog Will Have His Day Easier
7. What I Bought On eBay Average
8. Officiallement, Yo Atahadath Easier
9. Body Parts in Romance Languages Very Easy
10. Extinct Languages of the World Average
11. Words and Phrases Which Express Concepts Easier
12. Multilingual Countries Easier


Other Destinations
Explore Other Quizzes by aircorwin