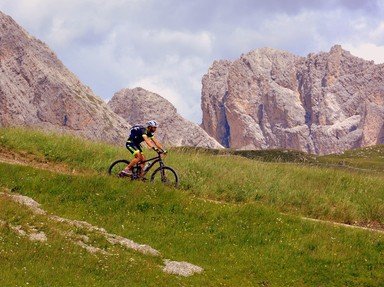 Things don't need to get worse, but for some cyclists, bikers, and mountain riders, the thrill is in the difficulty. In this quiz, we visit ten of the most dangerous bike trails in the world. You're in for the ride of a lifetime!

Stretching more than fourteen miles through the canyons of Utah, Porcupine Rim is a short distance away from the city of Moab, in the eastern part of the state. An alternative to the nearby Slickrock Trail, is considered difficult as it takes the rider on a long and winding trail eleven miles to the banks of the Colorado River along rough sandstone singletrack, the last three miles of which are along a sheer drop from the canyon to the water below.

There are certainly less-technical rides in the area-- the region's known for biking-- but this one has incredible views from its cliffside scenic lookouts.
2. Found in New Zealand, which of these trails over the Shotover River, now used by bikers, was carved along rocky cliffs by hand?

Originally built during a gold rush, Skippers Canyon Road is a seventeen kilometre roadway near Queenstown on the South Island of New Zealand and it's allegedly so unsafe that rental car companies won't ensure vehicles that are expected to take it. For vehicles, some stretches are so narrow that you aren't able to turn around on it, but on a bike it's a straight shot along an unpaved roadway with the canyon below on one side and a sheer rock wall on the other.

Unfortunately, the lack of pavement means it's a dusty ride in the heat and a muddy ride in wetter weather, neither of which are particularly safe considering the circumstances.
3. Found near the town of Vicenza, Italy, the roads and tunnels of what massif were originally created as a World War I mule road?

Monte Pasubio, or Cima Palon, is part of the Little Dolomites in Northern Italy and it's one of the taller peaks in Veneto, making it an amazing backdrop for mountain bikers of all types. Though the region had a number of trails adapted from roadways made to transport goods in World War I, the Strada delle 52 Gallerie (or the 'Road of 52 Tunnels') wasn't exactly the safest route through the area due to its narrow tunnels and sheer cliff drops. Locals have banned biking on the trails here though during the winter they're outright inaccessible.
4. Home to some of the toughest climbs in the world, what Nepalese mountain range allows bikers to make their way more than one hundred thirty kilometres through the Himalayas?

Including some of the tallest peaks in the world, the Annapurna Range is found northwest of Kathmandu and plays host to numerous hikers on the regular (in addition to climbers of some of the most dangerous mountains in the Himalayas). The Annapurna Circuit is a hundred and thirty kilometre trail that cuts amidst these peaks, starting at Besisahar and continuing around a number of mountains, rising up to over five thousand kilometres above sea level.

It's unsurprising that it's a difficult ride for inexperienced riders; the altitude alone makes it a tough trail.
5. The Hiline Trail, taking riders through Coconino National Forest, is home to a relatively frightening cliffside track found near what U.S. location?

Passing by the Seven Warriors and Cathedral Rock, the Hiline Trail cuts through a section of Arizona known for picturesque red rock cliffs and untouched canyons but for riders looking for danger, they'd find it on the White Line Trail, considered one of the most terrifying and potentially deadly rides anywhere in the world. Advised against by even the most professional off-road bikers, White Line requires riders to take a steep ride up the side of the canyon near Chicken Point Overlook and then ride around a narrow cliff edge.

A fall would mean taking the drop to the bottom.
6. Goat's Gully is one of many technical and dangerous trails in the Bike Park at which Canadian destination?

Whistler is world-famous for its Rocky Mountain ski hills and breathtaking outdoor adventure space, but the bike trails found there range from leisurely to the technically absurd. Goat's Gully is the most technical of the bunch, comprised of treacherous forest single-track, severely tight switchbacks, and steep, rocky paths. Though only a third of a kilometre in length, any wet conditions on the hill can result in a rough wipe-out.

It's one of more than twenty double black diamond runs on Whistler, but it's hard to compare with those views.
7. The hiking trails found around the mountains near Provence-Alpes-Côte d'Azur are amongst the most gorgeous when clear of winter snow, but they're still terrifying for riders. What mountain range would they be in?

Found in the Southwestern Alps near the Mediterranean coast of France and Italy, the Higher Maritime Alps are a stretch of peaks that cut along the border between the two nations, creating an are of protected land perfect for nature lovers. The trails at the top of these peaks, however, have been described by bikers as being "inaccessible" and "treacherous". Though many of the passes here have beautiful roads and bridle paths, some of the cliffside ones provide cliffside drops on their sides, making for harrowing hikes let alone bike rides. Staying on the roads is the safer option though narrow tunnels and sharp turns still requires bikers' full attention; going off-road provides a major risk to safety.
8. Making the list of most dangerous biking destinations is the Cliffs of Moher, found off the coast of what island nation?

The sea cliffs overlooking the Atlantic Ocean here are home to gorgeous views and while mountain bikers haven't stopped at the opportunity to take a ride along the edge of this landmark, it's not ideal for a pleasure ride. At its narrowest, the cliff trail on the edge of the land is only four inches wide, and without the careful confidence you need to navigate the path there, a harsh breeze could be all the difference between terra firma and a drop into to the sea.

The Burren Cycleway, which covers most of the County Clare coastline, sits back from the edge, and that's probably your best bet for a stress-free ride.
9. The Ridge, found in the Cuillin, is a nine kilometre trail considered by most to be unridable. Where is it found?


Answer: The Isle of Skye

The Cuillin Hills National Scenic Area is comprised of several jagged, rocky mountains and while it's a beautiful destination, it's not for beginner bikers. Trial cyclist Danny MacAskill, who grew up on the Isle of Skye, is one of the only bikers to be able to ascend and complete a run of The Ridge across several rides.

The trail along the top is completed on a razor's edge with a tumultuous drop on all sides and, even then, there are parts of the ride that are uncrossable. Collie's Ledge, one of the rideable ledges near Sgurr Mhic Choinnich, is only a couple feet wide.
10. Also known as 'Death Road', Yungas Road is one of the most dangerous for traffic of any kind, though it still attracts bikers. Where is it?

Long-known to be one of the most dangerous roadways anywhere in the world, Yungas Road heads out from La Paz, the Bolivian capital, and winds its way along unprotected cliff edges that reach as far as two thousand feet up from the canyon below. No matter what time of year, Yungas is bad for biking (though that doesn't stop people!). Stretching sixty-four kilometres it's a single lane of road, barely enough for more than a car at some spots, and it's seen its fair share of fatalities, sometimes from monsoon-like rains, sometimes from dangerous rockfalls, and sometimes from careless traffic.
Source: Author kyleisalive

Related Quizzes
1. Show Us Your Bike! Average
2. Bicycles Tough
3. Bicycling History Average
4. My EUC - a Unique and Interesting Device Tough
5. Roll on Down the Road Average
6. If You Can't Go Over It Average
7. Wheelchair Wheelies Average
8. They Don't Make These Cars Anymore Average
9. That's a Handsome Hansom Easier
10. In The Red: Goes Further Average
11. Transportation around the World Average
12. Hitch a Ride Average