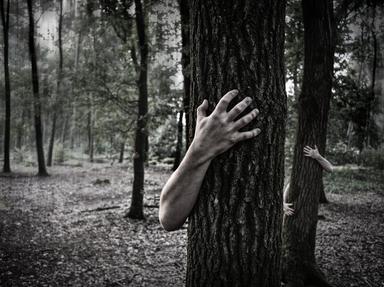 Trivia quizzes on the topic of Horror Mixture. How much do you know?

15 questions
Average, 15 Qns, Logan24, Apr 04 10
In my town, there is a magic horror section. All of the video covers are blank, but picking up a box to read the summary will take you into that movie. The only way out without getting slashed is to answer what movie you've stumbled upon! Good luck!
Average
Logan24
41271 plays
2.

10 questions
Difficult, 10 Qns, scarygirl11, Nov 01 21
One of my most favorite times of the year may have come and gone, but for horror fans like myself, it's Halloween all year around! So here's another batch of questions on horror flicks plots, taglines etc. from different subgenres and decades. Have fun
Difficult
scarygirl11

How Well Do You Know Your Movie Murderers?

15 questions
Average, 15 Qns, Logan24, Dec 07 09
There comes a time when once just isn't enough. The Magic Horror Section is back! The only way to survive this quiz is to correctly answer each question. Good luck. For some, this might be the last quiz they'll ever take.
Average
Logan24
20091 plays
6.

15 questions
Average, 15 Qns, Logan24, Oct 08 18
The Magic Video Store beckons you once again into its trilogy of terror. Enter if you must, but remember -- not everyone will make it out alive. Only those that have mastered their knowledge of horror movies stand a chance in here! Good luck.
Average
Logan24
Oct 08 18
18054 plays
7.

10 questions
Average, 10 Qns, kyleisalive, Jun 29 17
Here are ten movies of the horror genre each beginning with the letter A. See if you can recognize these thrilling flicks that were designed to frighten the audience. Good luck!
Average
kyleisalive

Scared? Nah - Horror Movies Can be Funny Too!

10 questions
Average, 10 Qns, kyleisalive, Jul 16 09
Isn't that just silly? No? Horrific? No? Well, make up your mind! These horror/comedies walk the fine line between two significantly different genres. Some do it right, and some do it wrong. Good luck!
Average
kyleisalive

Memorable Horror Movie Quotes 10 questions
Average, 10 Qns, freddy_krueger, Jul 28 03
Welcome to my quiz on some of the most famous lines of horror. I'll give you the quote and you tell me the movie it comes from. Have fun and good luck!
Average
freddy_krueger
8376 plays
15.

Do You Know Where Your Children Are?

10 questions
Average, 10 Qns, kyleisalive, Jan 20 19
Are they out raising the dead? Are they off haunting the neighbours? Are they plotting murder? These questions and more as we try to determine who these horror movie children are and what they're trying to do. Good luck!
Average
kyleisalive

Creepy, Just Creepy 10 questions
Tough, 10 Qns, alkmene, Jul 28 07
Turn off the lights and crawl under the bed. Now see how much you really know about the genre that makes our skins crawl - or our eyes roll. Beware - here be a few spoilers.
Tough
alkmene
8412 plays
17.

The Horrifying Realty of It All

10 questions
Average, 10 Qns, kyleisalive, Apr 20 11
Welcome to Horror Realty, dedicated to finding you your dream home! If you'd like to come over and look at some of our listings, I'd be glad to give you a tour and we can talk about how we can finance your move. Won't you step into my office?
Average
kyleisalive

Riddles On Movie Monsters And Murderers. 10 questions
Average, 10 Qns, HKH, Nov 12 10
This is my quiz on movie monsters and murderers. To make the quiz more fun, I've put them into riddles. I'll tell you if the riddle is about a murderer or a monster, and all you have to do is give me the answer. Hope you like it. Enjoy.
Average
HKH
7284 plays
20.

10 questions
Average, 10 Qns, kyleisalive, Sep 19 07
Beware! This quiz contains a slew of questions about films that should be known by most horror fanatics, and they all start with the letter B. Good luck!
Average
kyleisalive

Stay Out of the Woods!

10 questions
Average, 10 Qns, kyleisalive, Jan 17 12
The woods are a nasty place; don't go near them. Don't think about walking in them, stirring up trouble, or chasing small animals inside. These ten movies should be enough to convince you that the forest is not to be visited. Beware!
Average
kyleisalive

More That Is Not for the Faint of Heart 15 questions
Tough, 15 Qns, smgbuf, Jul 23 06
Horror fans who have conquered the first quiz can now try their knowledge of both popular and unpopular films of the genre.
Tough
smgbuf
7038 plays
24.

Classic Cult Horror Movies 10 questions
Average, 10 Qns, MonkeyCNuts, Aug 25 03
This quiz is on some of the horror movies I watched as a kid. Now most have been classified as "cult" flicks. These aren't your average slasher flicks. I hope these aren't too difficult for you.
Average
MonkeyCNuts
6513 plays
25.

10 questions
Very Easy, 10 Qns, kyleisalive, Mar 15 17
Horror fans may find this quiz to be fairly straight-forward, but if you don't know these popular horror baddies, there may be nothing scarier. Good luck!
Very Easy
kyleisalive

Horror Movies 10 questions
Average, 10 Qns, spooman, Feb 28 10
Since I love horror movies I thought I would make a quiz on the subject. I hope you enjoy it.
Average
spooman
4125 plays
29.

Roman Polanski's 1968 film, "Rosemary's Baby", is often cited as one of the most critically-acclaimed horror films ever released. Nominated for two Academy Awards (winning one), the film follows Rosemary (played by Farrow) as she is raped by demonic forces and subsequently gets pregnant with the satanic spawn. In the days leading up to the birth, she unveils a plot brought on by her neighbours for her to be impregnated and give birth to the Hellspawn signifying Satan's reign on Earth. Like "The Shining", "Rosemary's Baby" has become so popular it has fallen into public consciousness and is frequently referenced in TV and film alike. Roman Polanski has strayed from horror since this offering, but he has directed such award-winning films like "The Pianist", "Chinatown", and "Tess". - From quiz: Do You Know Where Your Children Are?
Myers.

Michael Myers started his killing spree as a child and has continued up until his adulthood. Who knows when or if he can be killed? - From quiz: Horror Movie Killers
Leatherface.

Leatherface (from "The Texas Chainsaw Massacre" series), while carrying his trusty chainsaw, has sliced and diced many people over the years. - From quiz: Horror Movie Killers
Freddy Krueger.

Freddy's been in "A Nightmare on Elm Street" and 6 sequels. A true classic in my book. - From quiz: Horror's Greatest Characters and Their Weapons!
The Amityville Horror.

Told to be based on real events, the story of "The Amityville Horror" was an odd one. A family moved into their beautiful new house to experience odd phenomena. Soon, they realized that the previous owners of the house were murdered. The movie and book soon spread into a large series of both novels and films. The remake featured some changes from the original, and was generally disliked by the author of the story, who sued the filmmakers. Both the original and the remake were generally popular in the box office. The sequels were not. - From quiz: Alphabetical Horror Films - A
Shaun of the Dead.

A hilarious romp through a zombie infestation, "Shaun of the Dead" uses British humour to poke fun at both the zombie horror genre and romantic comedy genre. Released in 2004, the film stars Simon Pegg and Nick Frost, both of whom use the everyday household objects around them to ward off the undead foes that have risen from the grave to eat brains. Of course, Simon Pegg's character needs to cross town in order to save his girlfriend from becoming a mindless cannibal, so they set out (with his mother, stepfather, and a couple of friends in tow) to hide together in a pub. Things go awry.
Oddly, the film is the first in a trilogy written by Edgar Wright, the second film being "Hot Fuzz" which stars the same major actors. - From quiz: Scared? Nah - Horror Movies Can be Funny Too!
Krueger.

Freddy Krueger, with his metallic claws, has killed many people in their dreams. - From quiz: Horror Movie Killers
This is category 1128
Last Updated Nov 07 2021 11:40 PM