Birds of the UK Trivia Quiz

Can you identify these British birds from the descriptions I give? Descriptions all refer to the male of the species.

Quiz Answer Key and Fun Facts
1. Which wader has a distinctive black and white head and breast, a brown back, and yellow legs?

The turnstone winters along Britain's shores, before returning to the Arctic to breed in the summer.
2. Which warbler has a reddish-brown breast, a dark brown head and back, and a distinctively cocked tail?

The Dartford warbler has seen its numbers in the UK decline markedly in recent years, and is now mainly confined to Hampshire and Dorset.
3. Which member of the finch family is most commonly found in heathland, and has a distinctive crimson crown and breast, a brown back, and brown wings with a white wing-bar?

The linnet was a popular cage-bird in Victorian times, but can now be found in the wild throughout the UK.
4. Which gull has a grey back, a yellow bill with a red spot, and pink legs?

The herring gull is widespread along British coasts, and is also seen frequently in towns scavenging for food!
5. Which member of the bunting family has a distinctive white collar, a black hood and bib, and a brown back and wings?

The reed bunting , as its name would suggest, is mainly found in reed beds and marshes.
6. Which duck has a chestnut head with a distinctive green stripe around the eye , running to the nape of the neck?

The teal is most common in Scotland, Ireland and northern England.
7. Which member of the crow family has black plumage, with a distinctive red bill and legs?

The chough can mainly be found on seacliffs in Wales and Ireland.
8. Which wader has a distinctive long crest, and has a black back which can appear to be green in bright sunshine?

The lapwing can be found on farmland as well as by the seashore, and is sometimes called a "peewit".
9. Which goose has a black head,neck,upper breast, tail and legs, a white face and lower breast, and a lavender-grey back?

The barnacle goose is a winter visitor to western Scotland and Ireland.
10. Which member of the thrush family is black with a distinctive white crescent on its breast?

The ring ouzel winters in Africa and is a summer visitor to the UK, where it is most likely to be seen in mountainous areas.
11. Which member of the wheatear family has a black head and back, white patches on its neck, wings and rump, and a chestnut breast?

The stonechat is found on heathland, mainly in western areas of the UK.
12. Which member of the grouse family has a plumage which changes from mottled brown in summer to almost pure white in winter , the exceptions being a black tip to its tail and a black line through its eye?

The ptarmigan is confined to northern Scotland, on mountains above 2000 feet.
13. Which member of the shrike family has a chestnut back, blue-grey crown and rump, and a distinctive black stripe through its eye?

The red-backed shrike has seen its numbers decline in the UK in recent years, and is now mainly to be found on heathland in Norfolk, Suffolk and Hampshire.
14. Which member of the rail family has black plumage with a white line on its side, white undertail coverts, and a red bill?

The moorhen can be found on ponds, rivers and lakes throughout the UK.
15. Which member of the swallow family has a brown back and wings, and a white underside with a distinctive brown band across its breast?

The sand martin is a summer visitor to the UK, where it is widespread; it winters in Africa.
16. Which member of the tit family has a black head with white patches on its cheek and the nape of its neck, an olive-buff back, and a buffish white underside?

The coal tit is the smallest tit to be found in the UK, where it is widespread.
17. Which wagtail has a blue-grey back and wings, a yellow underside and a black throat?

The grey wagtail is found throughout the UK, usually around rivers and streams.
18. Which sparrow has a chestnut crown, a brown back and wings, a black bib and a white cheek with a distinctive black spot?

The tree sparrow is found mainly in England and Wales, on farmland and in wooded areas.
19. Which member of the owl family has a golden-buff back and wings, and a white face and underparts?

The barn owl is found in most parts of the UK around farmland.
20. Which member of the grebe family has a dark brown back, a chestnut breast, neck and cheeks, and a small pale patch on its face?

The little grebe is also known as the "dabchick" and is found throughout the UK on ponds,lakes and rivers.
21. Which member of the falcon family has a slate-grey back, a black "moustache",a white breast and underparts streaked with black, and red thighs?

The hobby is found in the UK in the summer months, mainly in Dorset, Hampshire and Sussex.
22. Which member of the heron family has buff plumage streaked and barred with dark brown and black, and green legs?

The bittern actually became extinct in the UK during the latter part of the 19th century, but was reintroduced in the early 20th century. It is mainly found in the Norfolk Broads.
23. Which member of the auk family has a dark brown head, back and wings, white underparts and a long,pointed bill

The guillemot is found on sea-cliffs around the UK, especially during the summer breeding season.
24. Which member of the hawk family has rusty brown plumage with a streaked white head, yellow legs and a deeply-forked tail?

The red kite was an endangered species in the UK until a major conservation programme saw them make a remarkable recovery.
25. Which finch has a red-brown head and upper parts, peach underparts, white patches on its wings and tail, and a distinctively large grey-blue bill?

The hawfinch is the largest finch in the UK and is found mainly in deciduous woodland in England.
Source: Author Dizart 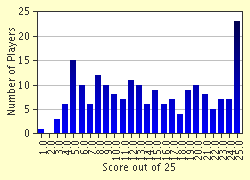