I'll give you ten lists of British birds, you spot the odd one out in each category.

Quiz Answer Key and Fun Facts
1. These are all in the crow family, but plumage-wise which is the odd one out?

Chough, raven and rook all have all black plumage. Jays are very colourful birds. They also tend to be shy and wary birds.
2. In terms of main dietary intake, which is the odd one out?

Whitethroat is a summer visitor belonging to the warbler family. It feeds mainly on insects and other small creatures. Gannet, razorbill and guillemot are all cliff-nesting birds and all feed mainly on fish.
3. Three of these birds make their nests in tunnels; which one doesn't?

Puffins make their tunnels on the tops of cliffs. Kingfishers usually excavate tunnels overlooking rivers and ponds but occasionally build them away from water. Sand martins dig out tunnels in sand banks and cliffs made of soft material.
Skylarks nest on the ground in meadows.
4. In terms of being summer-visitors, which is the odd one out?

Redstart, cuckoo and swallow arrive in April and May from their African winter quarters. Redwing are thrushes and are winter visitors.
5. Winter visitors now; which one doesn't belong here?

Fieldfare, brambling and waxwing usually arrive in October, and stay through the winter, returning to Scandinavia, Russia and other northern countries the following Spring.
Goldcrest is Britain's smallest bird and is mainly a resident species.
6. In terms of UK distribution, which is the odd one out?

Dunnocks are sometimes mistakenly referred to as hedge sparrows but actually belong to a family called accentors. They have slim beaks which mark them as insectivorous, unlike the seed-eating sparrows which have stout beaks.
8. If you fed the birds in a city garden, which one of these species would you not expect to see?

Chaffinch, robin and blue tit are very common species at garden bird tables. Robins especially can become very tame. Curlews are large wading birds often seen around estuaries. It would be extremely unlikely for one to turn up in a city garden, even one near the coast.
9. Three waders are present in this group; which one doesn't belong?

Dunlin and knot often form huge flocks of birds numbering several hundred, even thousands, of individuals. They are normally seen on the coast during migration. Lapwing also form large flocks on the coast but can also be seen inland, feeding on cultivated fields.
Fulmar look similar to gulls but are actually in the tubenose family. They are related to albatrosses.
10. In terms of being introduced birds, which one of these is the indigenous species?

Litle grebes or dabchicks are a common species of rivers, ponds and lakes.
Ring-necked parakeets are now found in several areas of southern England. They are probably the descendants of escapees from aviaries. The population is self-sustaining.
Little owls were deliberately introduced into Britain from mainland Europe during the nineteenth century.
Mandarin are ducks originally from eastern Asia. There are several populations in central and southern England.
Source: Author Mutchisman 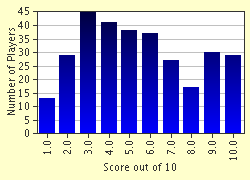