Come Fly With Me Trivia Quiz

I love watching the birds from my Norfolk kitchen window and attempting to capture them with my camera. All of these can be seen within sixty feet (twenty metres) of my kitchen sink.

Quiz Answer Key and Fun Facts
1. In the UK, which small male bird with red cheeks and bright yellow flashes on the wings, often takes possession of my blackthorn bush along with his family and friends? (In North America, his namesake doesn't have the flash of red feathers.)

These noisy little finches never arrive alone. The females lack the red cheeks but do have the flash on the wings. The fewest number in my photographs so far is three.
2. Which once very common little bird has seen its numbers decline by more than 50% in towns, and just under that in the countryside, since the mid 1970s?

These happy little birds usually appear in groups, so getting photographs of an individual was rather difficult. Once very common in the UK, their population decline has become a cause for concern.
3. Which common African bird, introduced to the UK in 1678 as an ornamental wildfowl, has been on the increase since 1993/94 and has a resident population of around 3,500?

Although named the "Egyptian" goose, these birds are most commonly found in East and South East Africa. I was only able to identify them once I had got my photographs. The geese love the soggy ground in the field just outside my back door.
4. Which gardener's friend, the favourite bird in the UK, is actually aggressive and territorial, but easy to photograph?

Unusually, both male and females have the same colouration, although juveniles do not have the red on their chests. I have several lovely photographs of robins as they are little posers. All those appearances on Christmas cards must help!
5. Which very rare visitor to any garden, including mine, is actually the most colourful member of the crow family?

Jays I find difficult to photograph as they do not visit often. They usually hide in the woods, but their screaming cry is a cue to get the camera ready. Rarely do I capture more than a blue flash or a white behind!
6. Which colourful little visitors live in flocks, so that the few in the garden could be feeding twenty or more others?

Blue tits are actually blue, yellow, white and green and are the acrobats of the garden. Rarely seen alone, if a few turn up together, they will be from the same flock and often cooperate in food gathering.
7. Introduced during the 17th century, which Colonial visitor has around 190,000 permanent UK residents?

Native to Northern America, including Alaska and Canada as well as Greenland, these birds are gradually expanding across Europe. They keep their young in nurseries and waiting for them all to cross the road in one go can take a long time. Lots of photograph opportunities though.
8. Which noisy bird with a short tail, pointed head and triangular wings looks black at a distance?

Seen in the sunlight, starlings are glossy purple and green birds with spotted chests. Keeping quiet is something they have not mastered, so when they are noisily demanding food, I can take a few photographs before payment with a few breadcrumbs.
9. Which little bird with an over-long tail never manages to stay still and calls out to his friends when in the air or on the ground?

These funny little birds seem to run after their food rather than fly. They are like little see-saws, bobbing up and down as they try to keep balance in my windy garden.
10. Which common garden bird with a sweet song is territorial and will stop his children coming into my garden, once they are fully grown?

The sweet song will change to an angry chatter when the blackbird thinks his children should leave home. He will see the youngsters off while his brown wife carries on eating the bits of food that have fallen under the bushes.
Source: Author zippolover 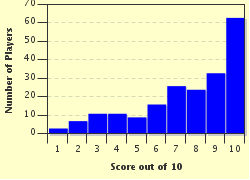 
Other Destinations
Explore Other Quizzes by zippolover