Can you identify these British birds from well-known nicknames? I have used names that I know to be currently in use and would welcome any feedback from FT players on the use of these and any other bird nicknames in current use.

My parents always used the name peewit for lapwing (Vanellus vanellus) and it was a long time before I realised that lapwing was the 'proper' name. Peewit is an onomatopeic interpretation of the lapwing's piping call. Green plover is often given in books as another alternative for lapwing but I have never heard it used.
2. The name "hedge-sparrow" is often used for which common species?

The term hedge-sparrow is very commonly used for dunnock (Prunella modularis) even though it is not closely related to sparrows. It belongs to a family called accentors. The bill shape is diagnostic; sparrows have stout beaks for cracking seeds etc, dunnocks are insectivorous and have thin, pointed beaks. I have also heard dunnocks being called 'hedgebugs'.
3. In parts of northern Britain the name "corbies" is given to which type of birds?

Throstle is still used occasionally to differentiate the song thrush (Turdis philomelos) from its larger cousin, the mistle thrush (Turdus viscivorous). You may be likely to hear it around West Bromwich as 'The Throstles' is also a nickname for West Bromwich Albion Football Club.
5. This bird is usually found around northern Scottish coasts where it is often referred to as a "bonxie." What is its official name?

Bonxie stems from the norse word for the great skua (Stercorarius skua). Bonxie is more widely used in the Orkney and Shetland Isles.
6. "Spuggie" is a name often used in the English midlands for which bird?

Spuggie is still widely used as a diminutive form of sparrow. There is usually no differentiation made between house sparrow (Passer domesticus) and tree sparrow (Passer montanus).
7. I have heard the term "Jack screamer" used for this bird, but the usage seems to be dying out. Which bird has this apt nickname?

Every year four or five pairs of swifts (Apus apus) take up residence in our loft and, although we are delighted to have them, they do start their loud screaming calls at about 4am in June! Jack screamers indeed.
8. This sounds more like an official title than a nickname, but which species is called "the warden of the marshes?"

The piping alarm call of redshank (Tringa totanus) is usually the first sign that a predator, or other danger, is approaching. Most other species have learnt to identify the call and take appropriate action.
9. Which owl species is sometimes nicknamed the "screech owl?"

Barn owls (Tyto alba) make a variety of calls including a rather eerie screech which is how this nickname comes about. There is also a distinct group of 21 species of owls called screech owls, but they are in a different genus to the barn owl.
10. This is a term most often used by sailors and fishermen. Which species is called "Mother Carey's chickens?"

I'm not altogether sure how storm petrels (Hydrobates pelagicus) acquired this rather strange soubriquet, so would welcome any information FT players might have.
ED: Mother Carey's Chickens is an alternate sailors name for storm petrels. So who is Mother Carey? Mother Carey is a corruption of Mater Cara, one of the epithets of Maria, the mother of Christ, used by the Spanish and Portuguese sailors who were the first westerners in the southern seas. "
About 10,000 pairs of storm petrels nest around British coasts; about one third of the world population.
Source: Author Mutchisman 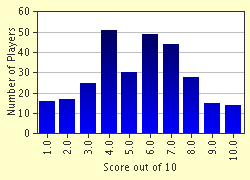