I love watching all birds but my favourites are raptors, or diurnal birds of prey. A mixed bag of questions about some of these magnificent birds, all of which can be seen in Britain.

Quiz Answer Key and Fun Facts
1. The diminutive merlin belongs to which family of raptors?

Merlins are mostly found on open moorland and are a ground-nesting species. They feed mainly on small birds such as meadow pipits which they catch in mid-air.
2. Ospreys feed mostly on small birds and mammals.

Ospreys are summer visitors to Britain and feed almost exclusively on fish. Their stronghold is in Scotland but pairs also breed in the English Lake District and in North Wales. A breeding and re-introduction scheme is also in place at Rutland Water in the East Midlands.
3. Buteo buteo is the Latin name for which bird of prey?

Buzzards were once mainly confined to the north and west of Britain; happily during the late 20th and early 21st century they spread their range across nearly all parts of the UK. In 2006 buzzards were the most numerous bird of prey in the country. They are just great to watch as they climb the thermals in search of food; rabbits are their main prey. Buteo buteo or as I call them beautiful, beautiful!
4. If you were fortunate you might catch sight of the rare hen harrier. If you were extremely fortunate you might observe their courtship display. Which of these activities might you be watching?


Answer: The airborne passing of food from male to female.

Hen harriers are birds of open moorland and, like merlin, are ground-nesting. They feed mainly on bird species including grouse. This behaviour can bring them into conflict with gamekeepers on grouse moors.
The passing of food in mid-air is a spectacular sight and forms only part of the 'skydancing' routine performed by the male.
Bitterns produce that strange booming call, black grouse display at a lek and peregrines dive at those spectacular speeds, not for display purposes though, they dive to catch their prey, mostly pigeons.
5. Three of these names are fictitious but which one is the real name of a British raptor?

Honey buzzards are scarce summer visitors to Britain. They live mainly in woods and forests. Their diet consists mostly of the pupae, larvae and adults of various wasp and bee species, although they will also take small mammals and reptiles.
6. The table football game "Subbuteo" is named after a bird of prey.

"Subbuteo" the game was created in 1947 by Peter Adolph. He was a keen bird-watcher and used the Latin name of the hobby, a British bird of prey, for his new 'hobby': its name being Falco subbuteo.
Hobbies are summer visitors to Britain and are the country's smallest raptor. They feed on small birds and large insects, particularly dragonflies.
7. Windhover is a nickname of which British raptor?

Kestrels are fairly common birds of open meadows and moorland. They are often seen along the verges of motorways, hovering into the wind looking for small mammals, lizards and insects. Take a close look next time you see one; the wings are beating like crazy, the tail widespread, countering every change in wind speed and direction but all the while they keep their head perfectly still, fantastic!
8. By the mid-twentieth century, red kites were almost extinct in the UK. Which country provided their last refuge at this time?

It is likely that red kites were down to two, possibly only one pair in the 1940s. Thanks to fantastic work carried out by various conservation bodies, their numbers slowly recovered in Wales throughout the late twentieth century. During the 1990s a re-introduction programme was carried out in several parts of England and Scotland.

This has been largely successful and these magnificent birds can now be seen in many areas.
9. Which of these raptor species breeds in Britain?

Montagu's harrier is a rare breeding bird found mainly in the south-east of England.
Eleanora's falcon is a summer visitor to Mediterranean coasts and islands. It has never bred in Britain.
Harris hawk is a North American species which is often used by falconers. Occasionally birds fly away but no breeding has been recorded.
10. The golden eagle is the only eagle species nesting in Britain.

White tailed eagles were re-introduced onto the Scottish isle of Rhum during the 1970s and 80s after being absent for some sixty years. The first successful nesting took place in 1985. Recolonisation has been slow but steady and in 2006 there were 32 nesting pairs around the west coast of Scotland (RSPB website).
Source: Author Mutchisman 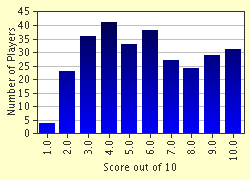