British Birds - 'The Female of the Species...' Quiz

In many British bird species the male and female are very similar, however in these species there are marked differences between the sexes. I'll give a description of the female bird, see if you can tell which species I'm describing.

Quiz Answer Key and Fun Facts
1. This is a common bird, often seen in gardens. Its size (25cm) and shape mark it out as a type of thrush. It is almost uniformly brown with paler underparts and with some mottling, but no clearly defined spots, on its breast. Which species am I describing?

Many people are surprised to learn that the brown bird hopping about in their garden borders is actually a blackbird. The male of course is all black with a bright yellow bill and eyering.
Juvenile ring ouzels could be mistaken for female blackbirds, but are birds of high ground and extremely unlikely to venture into gardens. Fieldfare and redwing both come into gardens particularly in bad weather but both have clearly defined spots on their breasts.
2. This female is obviously a duck but which one? It is mostly mottled in various shades of brown and white, but clearly has a purple speculum (the patch of secondary feathers visible towards the tail when swimming), edged in white. Which duck is this?

Mallards are found in most places where there is water. Many dabbling duck females look remarkably similar, especially from a distance, the female mallard's purple speculum is diagnostic. Teal is smaller than mallard with a small green speculum; shoveler has an odd shaped bill and also has a green speculum; gadwall has a very noticeable white speculum.
3. This female is a member of the warbler family. It has fairly undistinguished markings of brownish grey back and wings with much paler underparts. It has a prominent reddish-brown top to its head. Which species do you think it is?

In most species of warbler found in Britain, the sexes are similar. Blackcap is one of the few exceptions: only the male has the black cap, whilst that of the female is a reddish- brown.
4. This female is a large (about 52 cm) bird of prey. It appears mostly all dark brown, with variable amounts of cream on its breast(sometimes absent) and some cream on its shoulders. There is always a cream-coloured cap to its head, visible from quite a distance. which raptor is this?

When British birdwatchers see a large, brown bird of prey in flight, the first thing they often look for is a cream-coloured cap. Female marsh harrier is the only British raptor with this marking.
5. A familiar garden bird, this female is about 14 cm long. It has a streaky brown back and wings (sometimes with variable amounts of white). The underparts are buff-coloured. The head is light brown with a diagnostic buff stripe from the back of the eye. Which female is this?

House sparrows are still common birds in much of Britain, however there has been a (largely unexplained) decline in numbers during the late 20th and early 21st centuries. Female reed bunting could be confused with house sparrow but have a streaky breast and two white stripes across the face.
6. Predominantly a woodland species, this female is a summer visitor, often amongst the last to arrive in springtime. It has a pale grey head and back. The wings are darker with a prominent white patch. The underparts are mostly white with small amounts of buffy-brown. Which female is this?

Pied flycatchers usually arrive in mid May, sometimes later. They are most common in western oakwoods. Female pied flycatcher could be confused with spotted flycatcher but, as its name suggests, spotted flycatcher has a streaked or spotted breast and less white on its wings.
7. A common garden bird, this female is about 15 cm long. The upper parts are mostly greenish-brown and the underparts are greyish brown, sometimes with a faint flush of pink. the wings appear dark in flight with white shoulders and wing-bars. this species usually walks and hops with a distinctive jerky gait. Which female is this?

Chaffinch and brambling are closely related species but female bramblings always display some orange on their breasts. Linnets are also finches; they usually stay in the countryside and are not common in gardens. Yellowhammers are rarely seen in gardens and appear yellow.
8. A common large game bird about 60cm long (about a third of that is its tail), this female is cryptically coloured. It is mostly mottled brown but individuals can vary widely from dark brown to pale buff. This bird often 'explodes' unexpectedly from cover with a loud cackling call, making the observer jump. Which female am I?

Pheasants are common birds in much of Britain. The male is a colourful bird and easily spotted. The female tends to be much more secretive. Moorhens are water birds. Quail are small game birds and Ptarmigan are usually only found at high altitudes.
9. This female is a type of duck, she usually nests along fast-flowing upland streams and rivers and is only rarely found on the sea. Her body is mostly a grey colour, there is a clearly defined white throat patch and a clear dividing line between the neck and the brown head. There is a short downward crest from the head which is not always visible. Which female duck am I?

Female goosander and red-breasted meganser can look similar but there are important differences. Goosander has clearly defined neck and head markings, Red-breasted merganser's colours tend to blend into each other and she has a cream not white throat. Red-breasted merganser females have a noticeable spiky crest, whereas the crest on female goosanders often lies flat. Smew females are smaller than goosander and have white cheeks.
Goldeneye females are mostly brown.
10. This species is something of an oddity; it is classed as a wader but spends much of its time swimming and in breeding plumage the female is more brightly coloured than the male. In breeding plumage the female has a grey head with a white throat. It has a broad, bright orange/chestnut stripe running from its nape down the sides of its neck. Its back is grey and its wings are heavily streaked with dark brown and golden yellow. Which beautiful female is this?

Red-necked phalarope breed in the Arctic. In Britain they are usually seen in their non-breeding plumage, occasionally one or two turn up in their breeding colours and are a spectacular sight.
Source: Author mutchisman 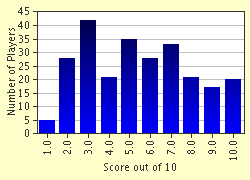 
Other Destinations
Explore Other Quizzes by mutchisman