British Birds - 'So Good They Named Them Twice' Quiz

All living things have a unique Latin name. Here are ten British birds that have the same word repeated. don't worry if you're not familiar with Latin names, I'll give you plenty of other clues.

Quiz Answer Key and Fun Facts
1. A common bird of the crow family, Pica pica is a bird you can count on! Can you guess which bird it is?

With their black and white plumage, magpies are highly conspicuous birds. Their habit of following one another when flying between trees etc has led to the children's' counting rhyme, "One for sorrow, two for joy...".
Jackdaw (Corvus monedula) is another member of the crow family.
Coot (Fulica atra) is a black water bird with a distinctive white shield above its beak.
Starling (Sternus vulgaris) is a speckled bird often seen in gardens.
2. Perdix perdix is a game bird, reputedly a gift at Christmas-time, although I've never actually seen one in a pear tree! I'm not making them all this easy but which bird is this?

"...And a partridge in a pear tree".
Grey partridge was once the most common partridge found in Britain but its numbers have declined. Red-legged partridge, Alectoris rufa, is now the most common.
Black grouse (Tetrao tetrix) is an uncommon game bird.
Black redstart (Phoenicurus ochruros) is a bird which, in Britain, is sometimes found in city centres.
Golden plover (Pluvalis apricaria) is a beautiful member of the wader family.
3. For a small bird, Troglodytes troglodytes has a mighty powerful voice! One of Britain's commonest breeding birds 'Jenny' can often be seen in gardens. Which bird is this?

There are several species of wren found in North America but only one in Britain. I never cease to be amazed at how powerful the wren's song is, for a small bird it carries an awful long way.
Robin (Erithacus rubecula) is one of Britain's best known birds.
Dunnock (Prunella modularis) is a small brown bird and Britain's only member of the accentor family.
Woodpigeon (Columba palumbus) is an extremely common pigeon.
4. There are no strings attached to this bird, but it is still a brilliant flyer. Which of these is Milvus milvus?

Red kite can now be seen in many areas of England, especially around the Chiltern Hills. It feeds mainly on carrion.
Honey buzzard (Pernis apivorus) is a scarce summer visitor to southern forests. Although called a buzzard it is not really closely related to common buzzard (Buteo buteo).
Sparrowhawk (Accipiter nisus) is a common raptor, as its name suggests it feeds mainly on small birds.
Green sandpiper (Tringa ochropus) is a fairly common wader, often found on inland lakes.
5. Usually called Britain's smallest bird, Regulus regulus, can occasionally be seen in gardens but prefers conifer plantations. How is it better known?

Goldcrest shares the title of Britain's smallest bird with its close relative firecrest; both are the same size but goldcrest is by far the most numerous and widespread.
Blue tits (Parus caeruleus) are common birds and are frequently seen in gardens.
Stonechat (Saxicola torquata) is usually found on moorland and open pastures, it would be most unusual to see one in a garden.
Nuthatch (Sitta Europaea) inhabit woodland and parkland, it does visit gardens but is larger than goldcrest.
6. This next bird is a large duck. Tadorna tadorna is a conspicuous bird often found around estuaries. It spends a lot of time on land feeding on vegetation. The sexes are alike. Which bird is this?

Shelduck is almost the size of a small goose. They often nest in rabbit burrows.
Wigeon (Anas penelope) is a duck but with marked differences between the sexes.
Sanderling (Calidris alba) and turnstone (Arenaria interpres) are both waders.
7. Riparia riparia is a summer visitor, often arriving as early as February. It nests in burrows. Which bird is this?

Sand martin and swallow (Hirondo rustica) are related, they both belong to the hirundine family. Sand martin is mostly brown above while swallow is very dark blue. Sand martins nest in holes which they excavate in soft sandstone cliffs etc, swallows nest in barns and other outbuildings.
Skylark (Alauda arvensis) nests on the ground, usually on moorland and rough pasture.
Nightingale (Luscinia megarbynchos) nests in dense vegetation or scrub, close to the ground, sometimes on it.
8. A scarce summer visitor, Crex crex is more often heard than seen as it is smallish and tends to stay in cornfields and grasslands. Which bird is it?

Corncrake numbers fell rapidly with the introduction of mechanical farming methods, as they often fell victim to combines etc. Their Latin name, Crex crex reflects their call which is always given from cover.
Stone curlew (Burhinus oedicnemus) is much bigger than corncrake.
Water rail (Railus aquaticus) us a shy bird, related to corncrake. It is almost always found by marshes, reedbeds etc.
Bittern (Botaurus stellaris) is a member of the heron family. Its voice is a deep booming sound which can be heard far away from its territory in the reedbeds.
9. This bird nests in holes which it excavates on only a very few coastal islands. It only leaves its burrows at night. Which one of these is Puffinus puffinus? (Be careful!)

Manx shearwater is a true ocean traveller, those that breed in Britain often feed in the south Atlantic and probably venture much further.
Puffin (Fratercula arctica) nest in clfftop burrows but are active by day.
Kittiwake (Rissa tridactyl) is a cliff-nesting gull.
Fulmar (Fumarus glacialis) is a cliff-nesting bird belonging to the tubenose family, which are related to albatrosses.
10. Serinus serinus is a finch but which one? Is this the bluff or the double-bluff?

It was the double-bluff!
Serin is largely found in southern Europe, but a few turn up in Britain most years.
Siskin (Carduelis spinus)is a small finch which will sometimes feed in gardens.
Twite (Carduelis flavirostris) is a finch usually found on northern moorlands.
Elbee jay (Notta cloo) is a term used by birdwatchers for any small brown unidentified bird. Elbee jay = LBJ = little brown job!
Source: Author Mutchisman 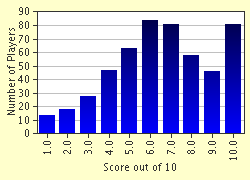