Chaffinches are finches and blue tits are tits, easy right? Unfortunately not all species' names include the family name. Can you place these ten British birds into their correct families?

Quiz Answer Key and Fun Facts
1. Siskins will readily come into gardens to feed on peanuts etc. Which family of birds do they belong to?

Siskins (Carduelis spinus) can look rather like small greenfinches but are more delicately marked. Their breeding range in Britain increased greatly during the latter half of the twentieth century. Other finches found in Britain, whose names do not include the suffix 'finch', include linnet, twite, redpoll and brambling.
2. Moorhens are common wherever there is fresh water and they can often be seen swimming on park lakes. Which family does the moorhen belong to?

The moorhen (Gallinula chloropus) belong to the Rallidae family which includes rails, crakes and gallinules. Another common British member of this family is the coot.
3. A very familiar bird in Britain is the blackbird. The male is a handsome creature indeed with his jet black plumage and bright yellow bill. Which family does the blackbird belong to?

Blackbirds (Turdus merula) are found in a wide range of habitats, from city centres to mountainous regions. The female looks more typically thrush-like than does the male. Other thrushes which can be seen in Britain include the winter visitors fieldfare and redwing.
4. The kittiwake is a sea bird which nests on coastal cliffs. Do you know which family it belongs to?

Kittiwakes (Rissa tridactyla) spend much of the year far out at sea. They return to their nesting sites in each Spring. Unlike some other gull species they are rarely seen inland. Their unusual name derives from their rather mournful cry.
5. Yellowhammers are very colourful birds usually seen around farmland. Which family does the yellowhammer belong to?

Male yellowhammers (Emeriza citrinella)are easy to spot as they usually deliver their song from the top branch of a bush or some other vantage point. During the second half of the Twentieth Century both their range and numbers of individuals declined markedly. They are now absent from several places where they were once considered a common species.
6. Which family does the colourful but wary jay belong to?

Only one species of jay (Garrulus glandarius) nests in Britain. Fellow members of the crow family found in the UK include magpie, jackdaw and chough.
7. Puffins are many people's favourite birds with their beautifully-coloured beaks and their jaunty character. To which family of birds does the puffin belong?

Puffins (Fraticula arctica) nest at the tops of cliffs in burrows which they usually excavate themselves, although sometimes they will use a rabbit's hole.
They belong to the auk family which also includes other cliff-nesting species such as guillemot, razorbill and little auk.
8. A common summer visitor to scrubland in Britain is the whitethroat. Which of these families of birds does it belong to?

The numbers of whitethroats arriving in Britain (Sylvia communis) declined by some 77% during 1969/70 (RSPB). This was probably due to a severe drought in their African wintering quarters. Although numbers have risen slowly they are still below the pre 1969 levels.
9. Once a rare breeding bird in Britain, fulmars are now a fairly common bird around coastal cliffs. To which family does the fulmar belong?

Fulmars (Fulmaris glacialis) belong to a group of birds called tubenoses, and are cousins to albatrosses. Taxonomically they are placed in the petrel family Other British representatives of this family include storm petrel and leach's petrel. Fulmars look superficially like gulls but in flight have a very different action, stiff wings giving short flaps interspersed with long glides.
10. Now, do you really think I would put a trick question in? To which family of birds does the bearded tit belong?

Despite its name, the bearded tit (Panuris biamicus) is not closely related to the true tits. It is more closely related to the old world babblers. It is a species that has sometimes puzzled taxonomists as most babblers live in tropical not temperate climates. Some people prefer the less confusing name of bearded reedling.
Source: Author Mutchisman 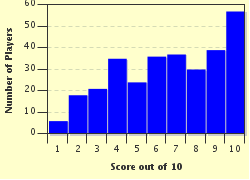