Can you name the breed of dog in the HOUND category? They're my favorite! All the breeds mentioned refer to the American Kennel Club classifications.

Quiz Answer Key and Fun Facts
1. I'm a very popular dog in the United States. I don't have a strong odor and I don't drool. I was the dog in the White House when Lyndon B. Johnson was President. You'll recognize me by my 13" or 15" height and tri-colored markings of black, tan, and white.

President Johnson named his three dogs "Him," "Her," and "Edgar."
2. I have a hard-to-pronounce, French name that tells you where I'm from and means "small, low to the ground, with a rough coat."

The PBGV is a scent hound that has personality traits that resemble the Terrier group.
3. I have an area of hair that grows in a different direction. Although I have modest speed compared to other Hounds, I'm very athletic. In fact, in my native Africa I'm known as a "lion hunter."

The Great Dane, Greyhound, Mastiff, and Bloodhound were crossed to create the Rhodesian Ridgeback breed.
4. I am the largest and tallest breed in the Hound group. As a puppy, don't be surprised if I weigh 100 pounds!

Unfortunately the Irish Wolfhound has a very short life expectancy.
5. Going moose hunting? I'm great at hunting large animals. My endurance is legendary and I can handle any type of terrain and weather! I also have a curly tail.

The Vikings sailed with Norwegian Elkhounds onboard. They were a very important part of Viking life.
6. I'm the only breed to be mentioned by name in the Bible. You'll see pictures of me in Egyptian tombs.

There is no such thing as a "grey" greyhound. Although "blue" is an official color, it is relatively rare.
7. I'm similar in color to the Beagle; however, at 19-21" I'm considerably taller. I'm a scent hound as well.

The Harrier is an English breed, first seen around 1260.
8. I am eager to please, intelligent, and loyal. A native of Germany, I'm great at finding wounded animals even when the scent is a week old.

The Plott is named after the Plott family who moved from Germany to the United States.
9. Just call me "Curly," it fits my tail just great! I'm a short-haired Hound and a native of Africa. Although I'm not mute, you shouldn't hear me bark!

The Basenji will sometimes make a "yodeling" sound.
10. I have a tendency to have a Roman nose; despite this I'm a very dignified dog! My weight can reach as high as 105 pounds if I'm a boy; or around 85 for a girl.

The Russian Wolfhound was the name of this breed until the 1930s when it was changed to Borzoi.
Source: Author sunflower822

This quiz was reviewed by FunTrivia editor crisw before going online.
Any errors found in FunTrivia content are routinely corrected through our feedback system.
Most Recent Scores
Jan 26 2023 : Kankurette: 9/10
Dec 16 2022 : Andyboy2021: 10/10 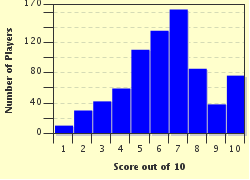 
Other Destinations
Explore Other Quizzes by sunflower822