The last of the seven dog groups- the hounds!

It was originally bred to race on oval tracks. Little whippet racing is done today.
2. This is the longest-coated sighthound.

Also known as the Tazi, this breed was bred to hunt in the high mountains.
3. This may be the oldest breed of dog. In ancient Arabic times, it was the only breed of dog allowed in the tent. It was used to hunt gazelles along with trained falcons.

Even today, many Muslim communities consider the Saluki to be the only "clean" breed of dog.
4. This breed is known as the 'barkless dog'.

Originating in Africa, this primitive breed yodels and yowls.
5. This breed was originally bred from crosses of Mastiffs and other dogs in order to hunt lions.

It is one of the hounds that looks least like a hound.
6. This breed is known for its short legs, long ears and melodious- to some!- voice. Its name derives from the French work for 'low'.

Bassets were bred as pack hunters that could be followed on foot, rather than on horse.
7. This is the only large scent hound with a shaggy coat.

The coat helps repel water. Irish Wolfhounds and Scottish Deerhounds are sight hounds, not scent hounds.
8. This small rabbit-hunting hound is bred with a white-tipped tail in order that it may be spotted easily.

Like bassets, beagles were used primarily by foot hunters.
9. In the USA, the Norwegian Elkhound is classified in the Hound Group even though it's actually a spitz.

It's there by tradition.
10. This breed, the best of the cold-trailing hounds (hounds that follow an old scent) received its name from its fine pedigree.

It's a blooded hound- as in blue-blood.
11. This breed, famous in folklore in Great Britain, became extinct in modern times and was recreated through a special breeding program.

The Irish wolfhound originated in Ireland, and was the subject of many tales, such as being the hound of Cu Culllain and the subject of the story of Beth Gelert, the wolfhound who, after killing a wolf to save his master's son, was slain by his master, who saw the blood upon him and assumed that he killed the infant.
12. This breed was bred to hunt badgers.

'Dachs' is German for 'badger'
13. This breed was created to hunt hares in packs. It is one of the rarest breeds in the U.S. and shares its name with an aircraft.

Several harriers have become outstanding agility dogs in the US.
14. This Russian dog was bred to hunt wolves.

The borzoi were said not to kill the wolf, but to pin it down until the hunter could slay it with a knife...apparently this was great sport in Russia!
15. Which of these is the national dog of Malta?

Although it looks ancient, recent DNA studies have shown a modern origin for this breed. The English name comes from its resemblance to paintings of dogs in old tombs, but the Maltese name, Kelb tal-Fenek, is rather more prosaic, just meaning 'rabbit dog'.
Source: Author crisw 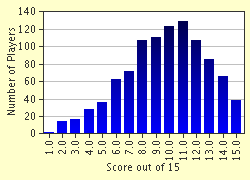