A quick quiz on Beagles, their behavior, et cetera.

Quiz Answer Key and Fun Facts
1. Beagles are renowned for their sense of smell and are frequently used as detection dogs.

Beagles have many more scent receptors in their noses than humans, and so are very useful working to detect items like drugs, contraband food and other items. Their original use was for hunting hare and other small animals. In the USA, a special 'Beagle Brigade' is deployed at airports.
2. Beagle health - what should you be on the lookout for if you have an older beagle?

Beagles are prone to epilepsy, although this occurs around the period of one to three years old, but can occur as early as six months or as late as nine years. Their legs are much shorter than they should be due to breed standard. Because of their short legs, they are also predisposed to suffering from slipped discs. All of the other illnesses may occur in a Beagle, but slipped discs are more common. Deafness and blindness occur in most older dogs.
3. Which famous monarch loved her beagles so much that she was painted with them in her portraits?

She also had seats on her horse to keep her pocket-Beagles in when she went out riding. They were often scenthounds for hunting purposes at this time, although having them as pets was not uncommon due to their loving nature and large puppydog eyes.
4. According to the breed standard, which of these should a beagle's coat be?

Black and tan is considered more of a Doberman coat color, white and liver is a terrier color, and no beagle should ever be brindle-colored. Lemon-spotted beagles are judged alongside tricolor, although tricolor (solid or faded) is much more common.
5. Why do beagles have such long, floppy ears?


Answer: To keep the scent close to the nose

The beagle's ears hang low and close to the face because when a Beagle follows a scent, it bows its head to the ground. The ears pick up the scent molecules because they hang so low and pass over the scent, therefore keeping the scent close to the nose so the dog doesn't forget what it is chasing.
6. My beagle, Alfie, has started whimpering when we leave the room. This has changed to him pushing his head back, opening his mouth in the shape of an "O", and letting out a long, high-pitched sound similar to that he would make when hunting. What is this known as?

It is known as baying because he is a hunting dog. Originally this was so the owners could follow the beagle when it had caught a trail. Nowadays, Alfie does not hunt and therefore he puts this to good use when he's upset about not being fed on time or when we leave, or even because he is excited when he sees us coming up the path.
7. What can be caused by the beagle's long, floppy ears?


Answer: Ear infection and damage to the ears

Ticks generally prefer warmer parts of the body, such as behind the ears or on the back of the dog, and so the longer ears don't affect ticks so much because they keep the head inside the ear, the flaps are generally less than the rest of the Beagle's body temperature.

The length of the ears won't generally affect whether the dog is deaf or not in later life. Stray hairs from the ears will be irritating to the eyes, but won't cause blindness. However, because the flaps cover the ear canal, heat is trapped between the flap and ear, encouraging yeast to grow and start an infection. Because the flaps are so long as well, it is easy for other animals to grab hold of them and cause damage.
8. Which of these is a beagle most likely to eat?

Beagles are gluttons that will truly eat anything. My beagle, Alfie, had been known to munch on flies and moths he's caught flying around the lights at night! Roadkill may poison a dog due to decomposition, and slugs and snails carry lungworm which can be fatal, so supervision of beagles, even when on a leash, is necessary.
9. What is coprophagia?

Disgusting as it sounds, it is thought to be a comfort in dogs that practice it. In my case, little Alfie was separated from his mother weeks too early. Because mama dogs eat the faecal matter of their puppies, it is thought Alfie does this as he learnt it from his mother and he is trying to act like her to make up for the fact that he was separated too early.
10. What makes beagles great watch dogs?

Beagles are loud and tend to bay when frightened or upset. Because of this, they may bay when confronted by an intruder and this means they are very effective watchdogs. They do have sharp teeth, but rarely ever bite. They aren't particularly heavy.
Source: Author jadenep

This quiz was reviewed by FunTrivia editor gtho4 before going online.
Any errors found in FunTrivia content are routinely corrected through our feedback system.
Most Recent Scores
Dec 31 2022 : Reamar42: 9/10
Dec 30 2022 : Guest 67: 8/10 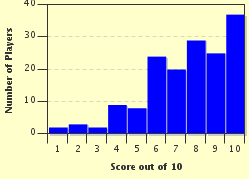 
Other Destinations
Explore Other Quizzes by jadenep