Greyhounds are wonderful dogs! See how much you know about this delightful breed.

Quiz Answer Key and Fun Facts
1. Greyhounds are one of the oldest of all dog breeds. Greyhounds, or dogs very similar to greyhounds, have been around for how long?

The greyhound is believed to have originated in the Middle East. Paintings of dogs very similar to greyhounds have been found on Egyptian tomb walls over 4,000 years old. Greyhounds were so prized in many ancient cultures that only royalty were allowed to own them.
2. For what purpose were greyhounds originally used?

Because of their great speed, greyhounds make ideal hunting dogs. They have an inbred predisposition to chase things, and as one of the fastest animals known, they can usually catch their prey. In ancient times, greyhounds were used to hunt deer and other large game; more recently they have been used to hunt smaller game, especially hares and rabbits.

In Greek and Roman art, Artemis and Diana, the goddesses of the hunt, were often depicted with greyhounds. From the description given in "The Odyssey," many people believe that Odysseus' faithful dog, Argos, was a greyhound.
3. Greyhounds are always grey.

The origin of the name greyhound is not known, but all sources agree that it has nothing to do with the dog's color. One popular theory is that it comes from "gazehound," since greyhounds hunt by sight, and not by smell. There are over 30 coat patterns and color combinations that are recognized for greyhounds, ranging from pure white to solid black. Greyhounds are often spotted as well. Perhaps the most common colors for greyhounds are black and brindle, a fawn coat with dark stripes.

There are some grey greyhounds, but, in dog world terminology, they are called blue instead of grey or gray.
4. The ancient Romans were also fond of greyhounds. They developed a sport which is still practiced today, in which greyhounds pursue a hare over a space of open ground. What is this called?

The modern sport of greyhound racing developed from coursing. The Roman historian Flavius Arrianus described the sport in 124 AD. He wrote, "The true sportsman does not take out his dogs to destroy the hares, but for the sake of the course and the contest between the dogs and the hares, and is glad if the hares escape." He also stressed that good sportsmanship should be observed: "Whoever courses with greyhounds should neither slip them near the hare, nor more than a brace (two) at a time." The hare cannot run as fast as the greyhound, but by zigzagging is often able to get away. Greyhounds are large dogs, and their weight sometimes prevents them from making sharp turns at full speed.
5. Almost everyone knows that greyhounds are one of the fastest breeds of dogs, but exactly how fast can they run (in miles per hour)?

Greyhounds are sprinters, not long distance runners. For brief periods on a straight track, greyhounds can reach a speed of 45 mph (72.4 kilometers per hour), but they cannot sustain that speed for long. It is remarkable, however, just how fast these beautiful dogs are.

In 2001 an Australian greyhound named Brett Lee covered 563 yards (515 meters) in an astonishing 28.88 seconds, an average speed of nearly 40 mph over a distance of almost one third of a mile.
6. Ireland has long been noted as a breeding place for fine greyhounds. Perhaps the most famous Irish greyhound was a small black dog who won the prestigious Waterloo Cup three times. Many pubs were named in his honor, and a monument to this famous dog stands near his hometown of Dungarvan, County Waterford. Who was he?

Master McGrath was born near Dungarvan, County Waterford, in 1866. He was small for a greyhound, weighing only 54 pounds; as a youngster he raced poorly, and was nearly put down. But his handler had faith in him, and soon Master McGrath was winning his races. In 1868, his owner, Lord Lurgan, entered him in the prestigious Waterloo Cup, a competition for coursing greyhounds that no Irish dog had ever won. The Waterloo Cup was run from 1836 until 2005, when it was outlawed under the Hunting Act of 2004. It consisted of an elimination competition involving 64 dogs chasing a hare over an open tract of ground. He not only won, but came back to win again in 1869 and 1871 (the 1870 race was ran under poor conditions, and Master McGrath fell through the ice on a frozen river and nearly drowned). He became so famous that he was even presented to Queen Victoria.

He was also the subject of a song, which has been recorded by many Irish singers (White Rose was a famous English greyhound):

White Rose stood uncovered, the great English pride,
Her master and keeper were close by her side;
They have let her away and the crowd cried "Hurrah!"
For the pride of all England - and Master McGrath.

As Rose and the Master they both ran along,
"Now l wonder," says Rose, "what took you from your home;
You should have stayed there in your Irish demesne,
And not come to gain laurels on Albion's plain."

"Well, I know," says McGrath, "we have wild heather bogs
But you'll find that old Ireland breeds good men and dogs.
Lead on, bold Britannia, give none of your jaw,
Snuff that up your nostrils," says Master McGrath.
7. Greyhound racing became popular in the 1920s. In the United States, where does greyhound racing enjoy the most popularity?

Over half of the licensed greyhound tracks in the United States are located in Florida. One sad consequence of the popularity of greyhound racing is the fate of dogs after their racing career is over. Few greyhounds race after the age of five, and there are too many dogs to be used as pets or for breeding purposes.

As a result, many greyhounds are sold to laboratories for medical testing, or simply euthanized. Many organisations have sprung up to encourage people to adopt former racing dogs as pets.
8. If you decide to adopt a former racing greyhound as a pet, you should be aware which of these potential problems?


Answer: Greyhounds may not make good pets for homes with small children

Contrary to popular belief, greyhounds are very gentle dogs. Aggressiveness is rarely a problem. Greyhounds do shed, but they have short coats, and do not shed as much as other breeds. Greyhounds need very little exercise; their owners often call them "45 mph couch potatoes." Former racing dogs are used to spending most of their time in crates at the track; they are intelligent dogs and are fairly easy to housebreak. Most greyhounds do not bark a lot, and are affectionate dogs who enjoy a lot of attention from their owners. Greyhounds tend to have fewer health problems than most breeds, and live to between 12-14 years, on average.

The reason that greyhounds may not be suitable for households with small children is that they are large dogs. The typical male weighs 70 pounds or more, and females 60 pounds. They can easily injure a small child unintentionally, just by playing with them. Conversely, greyhounds have thin skin, and can be harmed by rough play.

Another thing to be aware of is that greyhounds are bred to chase things. If you take your pet for a walk, and it sees a squirrel, for example, it is going to try to chase the squirrel, and there's not much you can do to break them of this habit. You will need a strong leash, and a firm grip.
9. Which of the following dogs most resembles a greyhound?

All of these breeds, like the greyhound, are sighthounds, and hunt using their eyesight rather than their sense of smell. All bear some resemblance to the greyhound, but the closest is the whippet, which is very much like a miniature greyhound. In fact, whippets are thought to be descended from greyhounds who were too small for hunting purposes. Like greyhounds, whippets are very fast and have sometimes been used for racing purposes.
10. Greyhounds are often a veterinarian's first choice as a blood donor for other dogs.

About 70% of all greyhounds have a blood type that makes them suitable as a universal donor for all dogs. In addition, many greyhounds are very patient and endure the process of blood collection with a minimum of fuss. One caveat in using greyhounds as blood donors is that they are susceptible to many diseases born by ticks, and need to be tested thoroughly before they are used as blood donors.
Source: Author daver852

This quiz was reviewed by FunTrivia editor Tizzabelle before going online.
Any errors found in FunTrivia content are routinely corrected through our feedback system.
Most Recent Scores
Jan 20 2023 : Guest 212: 9/10
Dec 13 2022 : Guest 103: 6/10 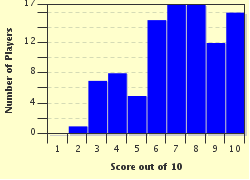