The family Centrarchidae, commonly known as the sunfish, is a group of fishes found in North America. The are valued as sport fish, forage fish, and even as bait. Here is a quiz with what I have learned about them over the last thirty years.

Bluegill are often the first species caught by children learning to fish. However, catching big "bull" bluegill (those that are over 7" in length and broader than a man's hand) on ultralight tackle can be exciting and challenging even for more experienced anglers.
2. Many do not realize that this species, the largest in the family, is actually a sunfish. It is one of the most sought after game fish in the U.S. and has many colloquial nicknames such as lineside bass and green trout.

One of the most exciting sights in sport has to be a 4-6 pound largemouth leaping out of the water, angrily trying to toss the hook. The largemouth can be identified from other similar species by the fact that their upper jaws reach far beyond the rear margin of the eye.
3. This is one of the only centrarchids that utilizes snails as a main part of its diet. Which is why in some parts of the U.S., it is called shellcracker. This species is less prone to hit artificials, so the best way to catch them is with live bait fished on the bottom.

Many times that I thought I had a decent sized bass on the line, it turned out to be a big redear. That's ok by me though, because these are one of the tastiest sunfish around. They are easily identified by the red (male) or yellow (female) rim around the gill flaps.
4. This fish is a tough little fellow that can tolerate a wide range of environmental conditions and is often the first sunfish species to repopulate depleted areas. It likes to lurk in the shadows and ambush its prey. It can be identified by its thick, greenish body, large mouth and irregular emerald-blue cheek lines.

This is one of the most widespread of the sunfishes. They tend to have a very basslike body and are sometimes called goggle-eyed bass.
5. This is the most visually stunning of the sunfish family. Adult males usually have turquiose blue bodies and flaming red or orange breasts. Females tend to be less boldly colored. Due to its small size, this fish is often used as bait on trotlines. They can also be identified by their long and flexible gill flaps.

These little guys are often caught by beginners. Also, due to the fact that they often feed on the surface, they are sometimes pursued by fly fisherman. They tend to inhabit small streams and creeks near vegetation.
6. Often called the yellowbelly sunfish, this centrarchid is native to eastern U.S. streams, but has been widely introduced throughout the nation. It can be definitively identified by its extremely long and narrow gill flap. It is one of the few sunfish that can be commonly caught at night.

They are also called, appropriately enough, robin. There's a little creek not far from my house that seems to have an endless supply of these and they are a worthy opponent for my little 2lb rig. In my opinion they are one of the hardest hitters of all the panfish.
7. This is another brightly colored sunfish. It has an orangish-red breast and belly with a brownish to olive green back and sides. They are speckled with orange, yellow, blue and emerald spots. They can be identified further by a crimson halfmoon on the rear edge of the gill flap.

Widespread but more common in the northern and eastern United States. It is thought that the name was derived due to the fish's shape resembling that of a pumpkin seed. Sadly, this is one species that I've never caught.
8. Sometimes called the bronze bass or brownies, this is another popular sport fish in the sunfish family. Some people consider them to be the finest fighters, pound for pound, of any fish. They prefer clear water lakes and cool streams. Specimens weighing up to 12lbs have been caught.

Smallmouth bass can be identified by the fact that their upper jaw never extends beyond the eye. They also have vertical barring on their sides unlike the lateral stripes found on the sides of the spotted or largemouth bass.
9. This sunfish is also popular with anglers and can often be found in large schools. They have a high reproductive capacity which often leads to overpopulation and stunting in smaller lakes. Although they will bite on nearly any live or artificial bait, minnows are a sure bet for these aggressive feeders.

Fisherman who specialize in this species sometimes create artificial habitats with brush or PVC pipe to attract fish to a preferred location.
10. This is the state fish of Texas. Unfortunately, biologists worry that due to hybridization with introduced spotted and smallmouth bass, the pure strain of this species is disappearing. It is found only in Texas and it is named for a river in the central part of the state to which it is endemic.

These fish look very similar to spotted bass but can be distinguished by the fact that the greenish coloration on their backs extends further down the sides. They are almost completely green except for the cream on their bellies.
Source: Author slipnslide 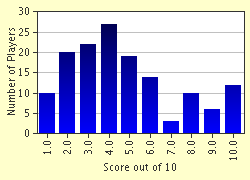 
Other Destinations
Explore Other Quizzes by slipnslide