Paddlefish Panorama (a WHAT fish?) Quiz

Paddlefish... what in the heck kind of fish is THAT? Come find out what a paddlefish is in this fun, informative 10 question quiz about this American freshwater giant.

Quiz Answer Key and Fun Facts
1. There are two types of paddlefish in the world; Polydon spathula, the American paddlefish, and also Psephurus gladius, that inhabits the Yangtze (Chang) River, which is the:

Chinese paddlefish is correct, the others don't even exist. The Chinese paddlefish differs slightly from the American in that it has more triangular, pointy snout than the nicely rounded one of Polydon spathula, and it also grows much bigger than its American relative.

Sadly, scientists declared the Chinese paddlefish extinct on September 15, 2019. Overfishing, as well as habitat loss, led to its demise.
2. Paddlefish use their long snout, also called a rostrum, to dig on the bottom for food.

False. Scientists first believed this to be the case, until it was discovered that paddlefish are actually "filter feeders", opening wide their maws to filter zoo plankton from the water as they swim along. One third of the paddlefish's body is made up of the rostrum! They've also been called "freshwater whales" for being filter feeders, as are many types of whales.
3. Paddlefish populations in some parts of the United States are in danger for which of the following reasons:

All three reasons listed are having an effect on the population of
Polydon spathula, especially the construction of dams which block the running water in which they traditionally spawn. Although paddlefish thrive in still water, such as quarries, they will only reproduce in running water.
4. So, what DOES a paddlefish use its rostrum (snout) for, anyway?


Answer: to act as a type of underwater airplane wing that will keep the fish from sinking as it continually swims mid-water and to sense plankton-rich areas

The rostrum gives the fish stability as it swims and also helps it find food, although even paddlefish with damaged rostrums have shown no difficulty in finding enough food to be healthy and of good weight.
5. Since they are closely related to sturgeon, American paddlefish are also known as "_______________" sturgeon.

Spoonbill is correct, referring, I believe, to the slightly rounded tip of the paddlefish's rostrum. Spoonbills are a close relative of sturgeon, and most caviar sold under the label "sturgeon roe caviar" actually comes from paddlefish.
6. Paddlefish are the most ancient surviving animal species in North America.

True. Paddlefish have been swimming around North America for 300 million years, outliving dinosaurs! The explorer Hernando De Soto first discovered them in the Mississippi River in the 1500's.
7. In Spanish, paddlefish are called "pez espátula", which could be literally translated as: _________ fish.

Isn't this one obvious? As a fluent speaker of espańol, I am delighted by the name given to my favorite fish. Spathula is Latin for "spatula" or "blade", and Spanish is derived from Latin.
8. Paddlefish do not have scales as do most fish; they are a mostly cartilaginous fish, similar in that respect to sharks. Cartilaginous means:


Answer: made mostly of cartilage, not bone

Other than the jawbone, paddlefish are made of cartilage as are sharks and while both creatures do have deeply forked tail fins, that is not the definition of cartilaginous!
9. Polydon spathula can be found in 22 of the USA's 50 states (and was noted in 4 other states in the past) and can weigh anywhere from 60-140 lbs (or more!) with lengths of over 5 feet. It is, therefore, America's largest freshwater fish.

False... the paddlefish actually comes in behind its cousin, the white sturgeon, and another fish called a gar. The largest paddlefish on record ever caught weighed 198 lbs, captured in the state of Iowa. Interestingly enough, Missouri made the paddlefish its official state aquatic animal in 1997.
10. As you've noticed, paddlefish are definitely odd creatures. Which of the following facts about them is so odd it is NOT true?


Answer: paddlefish have an average lifespan of 80 years

All of those odd facts are true except the lifespan. A paddlefish's average lifespan is still rather long (for a fish!), between 20-50 years. Because they are filter feeders, paddlefish have to be caught by a fishing method known as "snagging". They are also from the same branch of finned-fish that rays come from, and have been tracked moving more than 2,000 miles down a river system in the USA.

Thanks for taking my quiz about my favorite fish! Paddlefish live in the quarries where I scuba dive, and I'm continually awed by their beauty and mystique.
Source: Author lachicadecafe 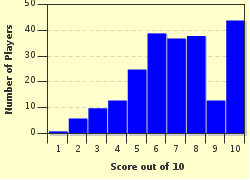 Related Quizzes
1. Fish Easier
2. Catch Them If You Can! Easier
3. Watch Out! They're Dangerous! Easier
4. I Caught What?! Easier
5. The Cold, the Wet and the Ugly Average
6. I Caught a Fish This Big! Average
7. Trolling For Trout Average
8. State-ly Fishing Average
9. Going Fishing Average
10. Untouchable Average
11. Gone Fishing Average
12. Sailfish takes a Selfie Average


Other Destinations
Explore Other Quizzes by lachicadecafe