This is a quiz about the many couples of Hollywood. Unfortunately, I couldn't fit all of them into one quiz, but I did my best. I hope you like my quiz!

Quiz Answer Key and Fun Facts
1. I was a Golden Globe winner with fiery, red hair. My husband was a Sundance Film Festival award nominee. We had two children, Caleb and Liv. What celebrity couple are we?

Julianne won a Golden Globe for Best Ensemble Cast of the 1994 film "Short Cuts", while her husband was nominated for Grand Jury Prize of the 1997 film "The Myth of Fingerprints".
2. I was an Academy Award winning actress. My husband was the lead singer for a major rock band. We had two children, Moses and Apple. What celebrity couple are we?

Gwyneth won an Academy Award for Best Actress in a Leading Role of the 1998 romantic comedy, "Shakespeare in Love", while her husband, Chris, was the lead singer of Coldplay, an English rock band.
3. I was an American actress. My famous dad passed his genes to me, helping me make it into Hollywood. My husband was a member of a glam rock band. We had one child, Milo. What celebrity couple are we?

Liv and Royston got married March 25, 2003. Their son, Milo William, was born December 14, 2004. Liv's famous father was the Aerosmith frontman Steven Tyler, while Royston was one of the vocalists of the glam rock band, Spacehog.
4. I was an Academy Award winning actress. I was most known for my wide, sparkling smile. I was also known for being "America's Sweetheart". My cameraman husband and I met while filming a movie. We had an affair and got married, leading to three beautiful children, Hazel, Phinnaeus, and Henry. What celebrity couple are we?

Julia won an Academy Award for Best Actress in a Leading Role of "Erin Brockovich". During the filming of Julia's 2001 romantic comedy, "The Mexican", she and her husband, Danny, began a love affair while he was already married. After Danny's divorce was official, the couple then got married.
5. I was a Golden Globe and Academy Award winning actress. I suffered a miscarriage during my rocky marriage with Tom Cruise. After Tom and I divorced, I met my husband at an Australian event. I had two adopted kids from my relationship with Tom Cruise, Isabella and Connor. What celebrity couple are we?

Nicole and Keith got married June 25, 2006. Nicole was married to Tom Cruise for approximately 10 years. During that marriage, she adopted two children. The two of them, Isabella Jane, born December 22, 1993, and Connor Anthony, born January 17, 1995, lived with Tom. Keith a country singer, famous for his albums, "Be Here" and "Love, Pain, and the whole crazy thing".

Nicole won an Academy Award for Best Actress in a Leading Role of the 2002 film "The Hours". She also had three Golden Globe Awards.
6. I was an actress, who co-hosted an American talk show with Regis Philbin. I met my husband, "Mateo Santos", when I starred in "All My Children", from 1990 to 2002. My husband was known for starring in the Canadian TV series "1-800-Missing". We eloped and had three children, Michael, Lola, and Joaquin. What celebrity couple are we?

Kelly and Mark starred in "All My Children", Kelly as Hayley Vaughn and Mark as Mateo Santos. Kelly co-hosted "Live with Regis and Kelly", while Mark starred in "1-800-Missing" and Kelly in "Hope & Faith".
7. I was an American actress and the star of the ABC drama, "Alias". I was once married to "Felicity" star, Scott Foley. We divorced in 2004 and I married the star of "Hollywoodland" and "Good Will Hunting". I gave birth to a girl, Violet, in 2005. What celebrity couple are we?

Jennifer was once married to Scott Foley. They married in 2000 and divorced in 2004. On Jen's thirty-third birthday, Ben proposed, and two months later, they were married.
8. I was an American actress. My husband, who was 15 years my junior, was a "Punker" and was also known as "Michael Kelso". I was once married to a "die hard" actor but we divorced in 2000. My three kids, Rumer, Scout, and Tallulah called my hubby, M.O.D, as in "My Other Dad". What celebrity couple are we?

Demi was known for starring in films, such as "Ghost", "St. Elmo's Fire", and "G.I. Jane", while Ashton was known for starring as Michael Kelso in "That's 70's Show".
9. I was a Golden Globe Award winning actor. My wife, the star of "Spellbinder", and I got married in 1991. That marriage was legally invalid, so we remarried. What celebrity couple are we?

Kelly and John got married on September 5, 1991. That marriage was legally invalid, so they remarried that same month. John won a Golden Globe Award for Best Performance by an Actor in a Motion Picture in the 1995 film, "Get Shorty".
10. I was a successful country singer. In 1996, I was engaged to a producer, then I met my husband, a fellow country singer. We got married that same year. During our marriage, we tried not to be apart for more than three consecutive days. We had 3 kids, Gracie, Maggie, and Audrey. What celebrity couple are we?

Faith Hill was once engaged to music producer, Scott Hendricks. Once she met Tim McGraw, singer of "Indian Outlaw" and "Don't Take the Girl", it was love at first sight. They married October 6, 1996. They had 3 daughters, Gracie Katherine (born 1997), Maggie Elizabeth (born 1998), and Audrey Caroline (born 2001).
Source: Author talkingfrog234 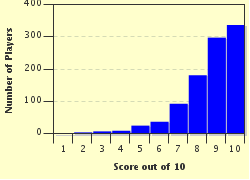 
Other Destinations
Explore Other Quizzes by talkingfrog234