I hope you enjoy the quiz about John Belushi and the movies he was in.

Quiz Answer Key and Fun Facts
1. What was the nickname of Belushi's character in 'National Lampoon's Animal House'?

One of the best comedies of all time.
2. TRUE or FALSE: In 'Neighbors', John Belushi and Dan Aykroyd decided to switch roles just prior to filming the movie.

John Belushi was originally cast in the role of Vic and Dan Aykroyd in the role of Earl. The two decided to switch roles just prior to filming the movie.
3. 'Over? Did you say over? Nothing is over until we decide it is! Was it over when the Germans bombed Pearl Harbor? Hell no!' Which movie is this quote from?

4. In 'The Blues Brothers', other than in the jail sequences, what does Jake never take off?

5. Which movie does Belushi fall in love with a beautiful, feminine, eloquent, nicely dressed Ornithologist and gets attacked by a mountain lion?

Blair Brown also starred in this comedy.
6. How many movies did Belushi star in with Aykroyd?

They starred together in '1941', 'The Blues Brothers', 'All You Need is Cash' and 'Neighbors'.
7. Which Belushi movie also stared Jack Nicholson?

Belushi's movie debut, also starring Mary Steenburgen and Christopher Lloyd.
8. Which horrible movie did Belushi do with Talia Shire ('Rocky' and 'The Godfather')?

9. YES or NO: Did Belushi ever star in a movie directed by Steven Spielberg? 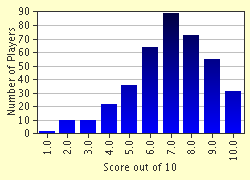 
Other Destinations
Explore Other Quizzes by jessesky1969