Swedish director Ingmar Bergman passed away on July 30, 2007, with a catalog of films that rivals any of the all-time great directors. This quiz explores some of his best films...good luck!

Quiz Answer Key and Fun Facts
1. Ingmar Bergman entered the film business as a writer in 1944. After his first screenplay, for the 1944 film 'Torment', he moved on to the role of writer/director. What was the first film directed by Bergman from 1946?

No surprise at all that, with crisis, Ingmar Bergman began exploring the seamy underside of human nature. 'Crisis' is a film about an innocent small town girl who is drawn to the allure of Stockholm, only to find the city not as wonderful and welcoming as expected. Bergman would continue with such depressing subjects throughout his entire career.
2. In 1957, with the film 'The Seventh Seal', Ingmar Bergman would begin a 13-film collaboration with what internationally acclaimed actor?

Sadly, this film collaboration that began in 1957 would end in 1971 with the film 'The Touch'. A rift between the director and the actor made it so they would never work together again.

Aside from his Bergman films, you may recognize von Sydow in such English language films as 'The Greatest Story Ever Told', 'The Exorcist', 'Strange Brew', 'Dune' and 'Hannah and Her Sisters'.
3. In reference to 1957's 'The Seventh Seal', during what general time period was this absolute masterpiece of a film set?

'The Seventh Seal' is, for many, Bergman's greatest work. It tells the tale of a medieval knight and his squire who have returned to their country only to find it ravaged by the plague. The von Sydow character's classic match with the grim reaper has been the subject of many a parody.
4. 1957 was a productive year for Ingmar Bergman. Not only did he direct 'The Seventh Seal', he also wrote and directed another of his classics, known in Swedish as 'Smultronstallet'. After what 'wild' fruit was this film titled in English?

'Wild Strawberries', the story of an elderly professor who makes a journey to a university to receive an honorary degree, travelling with his daughter-in-law and some hitchhikers, is another of Bergman's most highly regarded films. It also features Victor Sjostrom, Sweden's premier director prior to Bergman, in the lead role.
5. What 1960 film by Ingmar Bergman was the first of three films by the director to win an Oscar for Best Foreign Film?

'The Virgin Spring' was an interesting (though perhaps a little stiff) film about a young woman who is raped and murdered, while on the road, by three bandits, who later unwittingly spend a deadly night in the house of the girl's family. Depressing in the classic Bergman style!
6. What problem is dealt with in the 1961 film 'Through a Glass Darkly', the first of his 'Faith' trilogy?

'Through a Glass Darkly' was the first of a trilogy that also included 'Winter Light' and 'The Silence', the two latter films being released in successive years following the first. 'Through a Glass Darkly' was the second Bergman film in a row to win the Best Foreign Film Oscar, and it also garnered for Bergman his second of nine Oscar nominations (the first for 'Wild Strawberries'). Sadly, he never won a single Oscar, unless one counts his honorary Thalberg Award from 1971.
7. 'Persona', from 1966, is certainly one of the most bizarre and celebrated movies directed by Bergman. Aside from actress Bibi Andersson, what other long-time Bergman collaborator appears in this film, her first time working with the director?

Liv Ullman, who is Norwegian, worked with Bergman a total of 10 times, beginning with 'Persona' and ending with the 2003 TV movie 'Saraband'. Bibi Andersson was also one of Bergman's regular players, collaborating a total of three times with the great director.

'Persona' is one of the more bizarre films I've ever seen, somewhat similar to David Lynch's 'Mulholland Drive' in that the two main character's identities seem to be interwoven in an almost inexplicable manner. Confusing, but captivating!
8. Did the unrelated Swedish film legends Ingmar Bergman and Ingrid Bergman ever work together on a film?

Indeed, though late in both of their careers, they managed to work together on one film, namely 1978's 'Autumn Sonata'. Sadly, this was their only feature-length film collaboration, but what an enjoyable film it was! Liv Ullman also appears in this film about a mother and daughter who really have it out about their dysfunctional relationship. Depressing, yes, interesting, even more so.

By the way, here's a strange tidbit. Ingmar Bergman was married in 1971 to a Swedish actress named Ingrid von Rosen, who then became the second Ingrid Bergman!
9. No mention of Ingmar Bergman would be complete without giving some recognition to his long-time cinematographer-collaborator. What is the name of this master of the camera?

Nykvist first worked with Bergman in 1953, but it was on the 1960 film 'The Virgin Spring' where the two became constant collaborators. They worked together a total of 18 times, the last time being for the 1984 TV film 'After the Rehearsal'. Unlike Bergman, Nykvist won two Oscars out of three nominations, for 1972's 'Cries and Whispers' and 1982's 'Fanny and Alexander'.
10. What was the name of the 1982 film epic directed by Bergman, that was his last cinematic release?

'Fanny and Alexander' is the culmination of Bergman's life's work. It follows the young lives of two children who cope with their father's death, and later their abusive stepfather. Though the film contains depressing moments, as per usual with Bergman, it also contains moments of mystical whimsy. Despite its very long running time, it is a must see!

Thank you for trying this quiz, I hope you have enjoyed it.
Source: Author thejazzkickazz 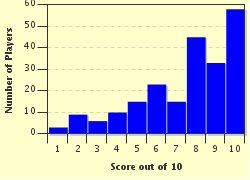