Footwear ranges from practical to fashionable to a fetish. How much do you know about the history of shoes?

Quiz Answer Key and Fun Facts
1. Chopines were very tall platform shoes, initially created to keep elite feet from the dirt and muck at street level. They towered to ridiculous heights and first became fashionable in the 15th and 16th century in which city?

The platforms were generally made of cork. The demand for cork for these shoes was so high at this time that Spanish sources were nearly tapped out. The tallest chopines were up to 30 inches high, so a servant had to walk beside the wearer to help the fashionista balance.

The fad spread throughout Europe, although some governments outlawed them. Even Shakespeare mentioned chopines, in "Hamlet".
2. Foot binding was fashionable in the Chinese court. Elaborate, embroidered slippers were worn by these women. What were these shoes known as?

The binding began around age 4-5. The bandages were 10 feet long and about 2 inches wide. The ideal was to have the length of the foot restricted to 3-4 inches. Luckily this practice died out in the 20th century.
3. Who was the shoe designer who constructed his first pair so his sister could have new ones for her first communion? He designed shoes for Hollywood stars. After studying anatomy, he added steel inserts for arch support. He returned home to Italy and set up shop in Florence.

Perugia did indeed create shoes for Hollywood stars (e.g. Rita Hayworth and Gloria Swanson), but he was French, not Italian. Manolo Blahnik is from Switzerland, although his shop is in Italy. He also keeps well-heeled stars well-heeled; Madonna and Bianca Jagger are devotees, and Carrie Bradshaw, one of the characters on "Sex and the City", owned miles of his stilletos. Bruno Magli is originally from Bologna and his shoes are more widely distributed.
4. During the OJ Simpson trial, a Federal Bureau of Investigations expert testified that the bloody footprints at the crime scene were left by a pair of size 12 shoes from which designer?

The shoes have never been found, and OJ declared the Bruno Magli style "ugly." Certainly led to a spike in sales, perversely.
5. Archaelogic evidence suggests that shoes have been worn for a very long time. However, since the materials used to create shoes decompose fairly rapidly, few ancient shoes have been discovered. The oldest shoes found date to approximately 10,000 years ago. Where were they found?

Found in Native American archeologic sites in Oregon and California, these sandals were crafted from woven ropes - the ropes were made from sagebrush bark or tule. Ancient sandals have been recovered in all of the other countries listed, but none date back so far.
6. How did Doc Martens get their name?

A German physician, Klaus Maerten, invented the air cushioned soles of these shoes, supposedly after injuring his ankle skiing. When he later looked to license his product internationally, the British company which bought the patent rights anglicized the name.

In the 1970s the shoes became the standard uniform of certain segments of the youth subculture. In 2003, declining sales forced the company to close the UK factory and the shoes are now built in Asia.
7. What is the name for the Japanese shoes which are thong sandals with a wood sole raised up on two wooden strips.

Geta are noisy shoes to wear; the onomatopoeic term for the sound is "karan-koron". It also takes some practice to balance properly on them. Zori are flat sandals without a separate heel. Tabi are the socks with a cleft between the great toe and 2nd toe to accomodate the thong of zori or geta. Yukata is a type of light, summer kimono.
8. What type of shoe is a plimsoll?

Plimsolls were the first rubber soled shoes, originally produced by the Liverpool Rubber Company, which later became Dunlop. The word plimsoll is not restricted to that original brand; for example, Converse Chuck Taylors are considered plimsoll shoes.

The name comes from the plimsoll line on a ship's hull, which is the marking for the waterline when a ship is loaded to full capacity. It is unknown whether this name was applied to the shoes because the marking on the sole was reminiscent of a plimsoll line or if the wearer needed to heed the warning if water reached that line or they would soon be wet.
9. Espadrilles were originally created by Catalonian farmers. They called the shoes "alpargatas". To what does the name "espadrille," which originated in France, refer?

Esparto grass is a wiry, fibrous grass which was woven into rope for the soles of espadrilles. Many designers have adopted the espadrille style.
10. After coming home from a hunting trip with sopping wet feet, this man was inspired to create the "Maine Hunting Shoe" with a waterproof sole.

L. L. Bean sold his boots through the mail, initially by contacting everyone with a valid Maine hunting license. The company prospered, and now sells all sorts of clothing and outdoor supplies. Frye boots have been made since 1863, but are more suitable for riding than for slogging through marshes. Sears and Roebuck sold their share of boots, but Roebuck was a watchmaker, not a shoemaker. Cabela's sells boots too, but started as a Nebraska outfit selling fly fishing supplies.
Source: Author pusdoc 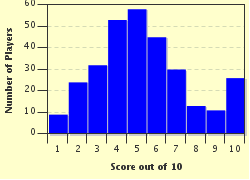 
Other Destinations
Explore Other Quizzes by pusdoc